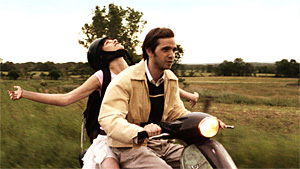 The film tells the story of Beagle (Aaron Stanford), who was the sole member of his family to be by the side of his mothers deathbed. Beagle, carried the burden of his father, who did not want to be present for her last days. Beagle’s brother, Guy, who abandoned his family three years prior, returns to mixed reactions. Beagle holds great resentment against Guy, and his Father, whose happy to have his family back together again.

Also part of the film is the story of a fifteen year old terminally ill student named Georgia (Kristen Stewart). Georgia, growing into a woman, is frustrated that she may never live to experience a full life, and finds the opportunity within Beagle, who is reaching for his own sense of adulthood. We meet Georgia at the stage of her illness that will force her into a wheel chair permanently. Masterson described this as tragedy, as Georgia, about to  be confined to a chair for the rest of her life, is at a stage at a young woman’s development that she wants to cut the ties, and feel free.

The performances here are stellar, Kristen Stewart’s embodiment of a young woman with a neurological muscular disorder is stunning. And the reserved, quiet, but struggling to grow up Beagle is played masterfully by Aaron Stanford. The film was shot in HD on Varicam, but their use of lighting and fixed focus lenses made for a very convincing film like final product.

The film is about a cast of wonderful characters, dealing with decisions they may or may not regret. There is a lot of emotion in this film, and a lot of touching, beautiful moments. Masterson’s hand is controlled, precise, and mature. Her years of being in the business has trained her well. She is very much an actors director, the film doesn’t get side tracked by scenery, but focuses very much on the characters and their intertwined relationships.

What is a cake eater? Masterson said a cake eater is an indecisive person who wants everything by their own way. Does everyone get to have their cake and eat it to? Well, you’ll just have to see the film now won’t you.

One thought on “IFFBoston Review: The Cake Eaters”