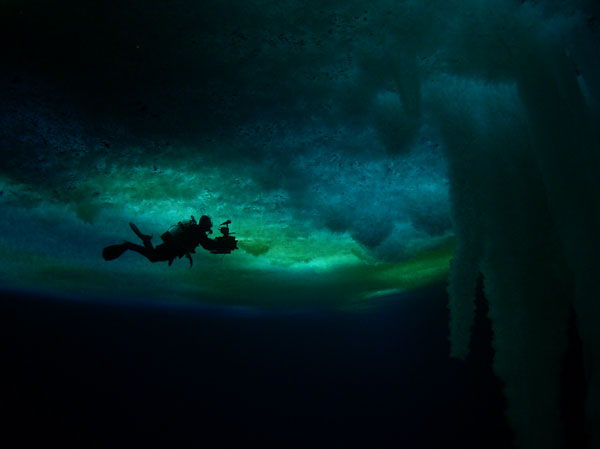 ‘Encounters at the End of the World,’ is the latest documentary from filmmaker Werner Herzog. And what a wonderful way to close out the sixth annual Independent Film Festival of Boston. ‘Encounters,’ is a fascinating, riveting and moving look at the people and animals that live in Antarctica.

Herzog’s film doesn’t have much of a plot. The story opens with the filmmaker and his crew flying to the McMurdo research center. It’s a man-made town, complete with a bowling alley, ATM and, Herzog angrily notes, a yoga studio. Before heading out, Herzog attends a training session, so everyone will know what to do if they’re caught in a whiteout. The results are less than promising. After the lesson, they set out to see scientists out in the field.

Two scientists are living on the ice, studying the seals that live there. They’re trying to see if the seal’s milk can tell them anything about obesity in humans. Then it’s onto a hole cut in the ice, where a scientist is about to make his final dive. The divers go into the water without a tether, so, they must be careful not to become disoriented, lest they loose their way and find themselves unable to get out of the water. (The ice is eight feet thick.) Another group of scientists are studying the song of the seals. They put their heads to the ice to listen to the seal song as they pass.

There are more scientists and Herzog’s presentation of their work is both impressive and amusing. Herzog also interviews the people who live at McMurdo, people who consider themselves travelers, who couldn’t ‘hold onto the map,’ and ended up falling down to the end of the world. One of the truck drivers is also a philosopher. A plumber is convinced he’s part Aztec because of the shape of his hands. A scientist traveled through Central America while sitting in a drainage pipe in the back of a truck. They’re all strange and incredibly fascinating.

‘Encounters,’ is unlike any movie I’ve seen before. While Herzog is no doubt impressed by the work being done by these scientists, he also has his own questions, (‘Are there insane penguins?’ ‘Why don’t monkeys rise up and enslave goats to ride around?’)

In many ways, this is a difficult movie to describe, due in no small part because of the amazement and awe that meets the viewer with every new scene. There’s no way to summarize or explain what the images look like. Every frame of this movie is a delight, something to study and drink in. There is no way any description will do this movie justice. You just need to see them for yourself. -Sam