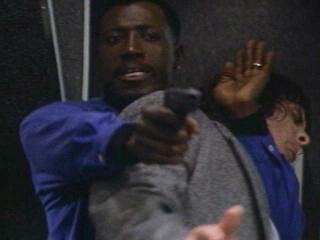 This week’s Saturday Afternoon Sweetness installment is in honor of everyone’s favorite tax-fraud indicted, Billy Blanks-lovin’ action star. His movies are hit or miss (who doesn’t love the first two ‘Blade’ movies and, on the other end of the spectrum, who the hell liked ‘Demolition Man’?!) and those that lead towards the miss end of things make for great rainy day fodder. I speak, of course, of Mr. Wesley Snipes. And the pick this week is none other than a shining example of that classic film formula, Snipes + Plane + Terrorists = Awesome, ‘Passenger 57.’

I’m not going to spend a lot of time with the plot of this movie as the above formula pretty much sums everything up. Snipes plays an ex-officer who trains flight attendants how to deal with on-flight danger scenarios, including terrorist attacks (how fortuitous). During one of these flights there is, brace yourself for this, a terrorist attack! A terrorist being transported escapes custody on the flight and tries to highjack the plane. Little does he realize, though, Mr. Snipes isn’t down with that. And through the rest of the movie’s 84-minute run time we get some kick ass high-altitude action including some landing gear shenanigans and the mother of all plane drama: cabin decompression!

This movie’s standard plot lets it sit firmly in the Saturday afternoon viewing world. I think part of what makes it a good Saturday movie is the fact that the film relies on the great plot coincidence that everyone who needs to be on that plane just so happens to be on that plane. It’s great when life sets

itself up like that: the fates put everyone who could royally fuck everything up and then everyone who can resolve said fuck up (on top of resolving personal baggage through resolving the fuck up) in the same room. But the plot alone isn’t what seals this film’s fate as TBS fodder. ‘Passenger 57’ gets a big boost from that bastion of B-movies himself, Mr. Tom Sizemore. Sizemore’s role isn’t totally substantial here, but his mere presence brings a certain flavor that would have otherwise made the movie feel just slightly off. Oh, and if a Snipes/Sizemore joint isn’t enough to get you to watch this when you’re bored or drunk at 2 in the afternoon, I’ll give you ‘Passenger 57’s’ ace in the hole: the lovely Miss Elizabeth Hurley.

Yes, my friends, ‘Passenger 57’ is the perfect afternoon movie. Not only is its story familiar and comfortable, but its action is good enough to draw you in with Snipes in great fighting form. And as an added bonus, Snipes gets to take a page from Arnold Schwarzenegger’s book and deliver one of my all-time favorite movie lines: “Always bet on black!” Thanks to ‘Passenger 57,’ I always will.