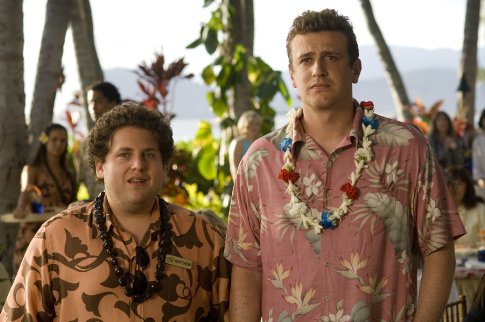 So, the movies been out a few weeks, and despite how hyped I was about it, I only got to see it this weekend. ‘Forgetting Sarah Marshall’ is a comedy about a break-up, written by star Jason Segel, and directed by Nick Stoller.

The film opens with the introduction of Peter Bretter (Jason Segel), a musician who happens to date a TV-star known as Sarah Marshall (Kristen Bell). Sarah plays a crime scene detective along side Billy Baldwin in a hilarious cameo. The story gets right to it, with Sarah breaking up with Peter as he stands, stark naked in his own living room. To deal with the end of his five-year relationship, Peter dates multiple women (which doesn’t go over very well, but is hilarious for the audience). On the suggestion of his Step-brother Brian (Bill Hader), Peter takes a vacation to take his mind off the heartbreak, happening to pick the one place he knew Sarah always talked about going. To his surprise, Sarah Marshall was there on a vacation with her new skeevy musician boyfriend.

There were times where I would have liked to see a little more from the characters (Peter and Sarah’s Musician Boyfriend got along a little too much at times, and for some of the things Sarah did, Bell coulda been a lil’ skeevier), but overall, I didn’t have a huge problem with that.

The film is hilarious, we spend pretty much the entire time with Peter, and Segel does a great job keeping your interest with one hilarious hijink or quip after another. The cast of characters was delightful, with other Apatow regulars popping up, Jonah Hill and Paul Rudd. It was an entertaining film, and a great debut at the pen from Segel. There were some very quotable lines in the film, and you’ll find yourself repeating them quite bit.

Judging from the amount of ad-libbing that must have gone on (there’s so much in the trailer that wasn’t in the film) I have no doubt the special features on the DVD will give this film a new life on home video. Check it out, perfect for a date flick, but leave the family at home.