Fear not, America. You no longer need to sit on the edge of your seat wondering, “But how does this massively epic, great and, yes, important tale go on?!” The 17 years of holding your breath will soon be ending with the official announcement that, yes, there will now be a sequel to the Keanu Reeves/Patrick Swayze joint, ‘Point Break.’ Collective sigh in three…two…one. 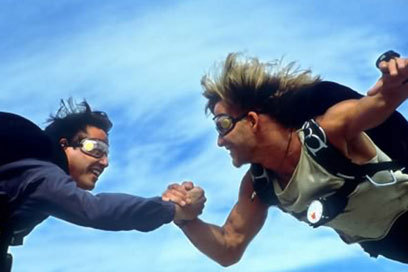 Jan de Bont is slated to direct the follow up to 1991’s film about bank robbing surfers, which is said to follow the story 20 years after the disappearance Bodhi, the Patrick Swayze character. No word on who will be returning for the picture, if anyone, but my guess is that Swayze is out due to his health problems. Keanu is probably knocking on de Bont’s door as I type this. And Gary Busey will probably toss his hat into the ring if he’s not too busy stalking and yelling at Jennifer Garner on red carpets.