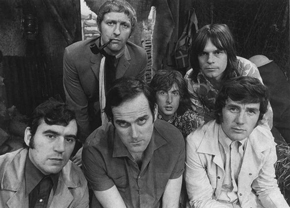 It’s pretty much agreed to by almost everyone that Monty Python was awesome. Even today, the reverence and admiration that meets the former members seems to only grow with the passage of time. John Cleese is more recognizable than ever. Michael Palin seems to run into Python fans at every turn in his travels around the world. Eric Idle is now a Tony Award winner for ‘Spamalot,’ while Terry Gilliam is a world renowned director and Terry Jones is studying, writing and continuing to make movies that interest him. You can do no better than watching ‘Holy Grail,’ or ‘Life of Brian.’ That said, if you want to go beyond Python and see what else is out there, may I recommend starting with something off the following list.

Yellowbeard
Supposedly, Graham Chapman had longed for years to make a pirate movie. Sadly, ‘Yellowbeard,’ would be one of the few post-Python film appearances he would make before dying of cancer in 1989. The movie is kind of a mess, with the main character’s enjoyment of raping a key comedy element. (Would that play today?) Fellow Pythoners John Cleese and Eric Idle show up, as do Cheech and Chong, Peter Boyle and Marty Feldman. Like much of the output by its members following the break-up, you look at the screen and think, ‘I wish this was a Monty Python movie.’ That said, anything with Graham Chapman playing the lead isn’t a complete waste of time.

A Fish Called Wanda
This is arguably the best post-Python movie by any of the members. Cleese co-wrote and co-stars in the movie, which won Kevin Kline an Oscar. It’s about a group of thieves who try to pull off a heist in London, which also involves a lawyer, played by Cleese and a hired-hand stutterer played by fellow-Pythonite Michael Palin. To explain the plot any more would imply that it’s important. It’s not. Cleese tells an amazing and dizzying story, but is able to keep all the different parts up in the air. He was nominated for an Oscar for the screenplay, making him the second Python to receive such an honor. This is arguably one of the best comedies of the 1980s, if not of all time.

The Fisher King
Directed by Python animator and sometime actor (and only American in the group,) Terry Gilliam, ‘The Fisher King,’ stars Jeff Bridges as a DJ who is wracked with guilt after a listener opens fire on a nightclub. He meets up with Perry, a homeless man played by Robin Williams, who was also affected by the shooting. Together they learn how to survive, search for the holy grail and run naked through Central Park. Like almost all of Gilliam’s other movies, it’s partly a fantasy, showing you some of the things that Perry sees and must confront on a daily basis. While Mercedes Ruehl won the best supporting actress Oscar for her role, this is one of those movies that has silently sunk without a sound. If you haven’t seen it, check it out. It’s funny, moving, touching and inspiring.

Note: I also highly recommend Terry Jone’s ‘The Wind in the Willows,’ and any of Michael Palin’s travel shows for the BBC. If forced to pick one, I’d go with Palin’s ‘Hemingway Adventure.’ -Sam