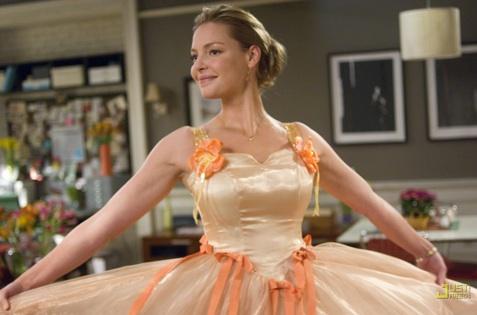 No, no, no, no, no. ’27 Dresses’ claims to be a romantic comedy. No, it is not. Katherine Heigl is supposed to be the ugly duckling, always lying down and letting her friends walk all over her. No, it’s not believable. Heigl is supposed to be angry with James Marsden’s character, and only slowly growing to like him throughout the movie. No, she doesn’t. ’27 Dresses,’ is a continuing conundrum, a film where scenes contradict each other simply because it makes for a better scene, and not the overall arc of the film

’27 Dreses’ tries to cram so much story into its movie, that it kind of looses itself. When does the first big issue come up? In a normal movie, maybe 20, 25 minutes into the film. In this one, it’s hard to say because there are so many different issues that show up early on, and then hang around for over an hour, and then magically work themselves out. Some movies take these plot points and are able to rise above them. Be biting. Comment on the material that is a comment on something. ’27 Dresses’ just kind of lays it all out there. Don’t like it? Don’t worry, another crisis is coming shortly. And why doesn’t anyone care? Every character has some deep seeded issue that they want to get over, but the next scene they’re fine and then the one after that, they’re back to having their problems.

In the end, there’s nothing terrible about ’27 Dresses,’ other than it’s complete lack of wanting to commit to anything. It wants to be everything to everyone. It’s the movie that wants the main characters to hook up if you do, but if you friend doesn’t, don’t worry, they regret it later. It’s a complex web of plot lines and characters, by the end I could have cared less.