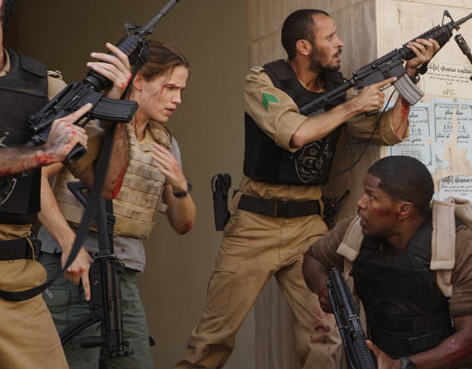 ‘The Kingdom’ inspired by the bombings in Riyadh May of 2003, is an entertaining film that deals with an investigation into a complex attack on a US compound on Saudi soil. The film shows the very delicate relationship the United States has with the Kingdom of Saudi Arabia. The film stars Jamie Foxx, and is directed by Peter Berg.

During a game of softball on an oil companies housing compound, terrorists attack, shooting up much of the compound, and detonating a bomb, killing both Americans, and Saudi State Police. Special Agent Fleury of the FBI (Jamie Foxx) and his team of investigators (Chris Cooper, Jennifer Garner, and Jason Bateman) set out for the foreign land, to find the perpetrators of the attack.Despite the strong financial relationship the United States has with Saudi Arabia (US being the #1 consumer of oil, and Saudi Arabia being the #1 producer), a team of FBI agents on Saudi land, investigating a domestic crime is cause for controversy. But, after some strings are pulled, they are allowed 5 days to find out what happened, and catch those behind it.

Saudi state police officers are assigned to protect the group, led by Colonel Faris al-Ghazi (Ashraf Barhom), and his colleague, Seargeant Haytham (Ali Suliman). The group, despite having permission for a short investigation, has their hands tied. Unable to investigate to the fullest, they keep coming across road blocks, due to many reasons, including cultural practices (example, a non-Muslim cannot lay their hands on a dead Muslim, even for investigative purposes).

The film was entertaining, I’m always a sucker for these semi-political investigative thrillers. However, it certainly was a bit formulaic and predictable. Director Peter Berg (’Friday Night Lights,’ ‘The Rundown,’ and the upcoming ‘Hancock’) and his production designers should be applauded for their execution. A film of this nature may not be accepted with open arms on location, so a bulk of it was shot (convincingly) in the state of Arizona. Mixed with footage from Abu Dhabi, the locations were extremely convincing. The cinematography was moody, and the
contrast in color from the stuff in the United States to the scenes in Saudi Arabian was well done.

The performances here was good, and, it’s no surprise that Jason Bateman stole every scene he was in. The talent from ‘Paradise Now’ (Barhom and Suliman) was a great addition to the cast (PS if you haven’t seen ‘Paradise Now’ fix that, immediately). Despite all these great elements, at the end, the film was extremely predictable, but still, fairly entertaining.