The writing life is a lonely one. You spend much of your day in a room. Alone with your thoughts and a typewriter. Or a computer. Or a dull #2 pencil and piece of paper. You get the point. So maybe it’s no surprise the cinema is rife with films about the loneliest pursuit in Hollywood. 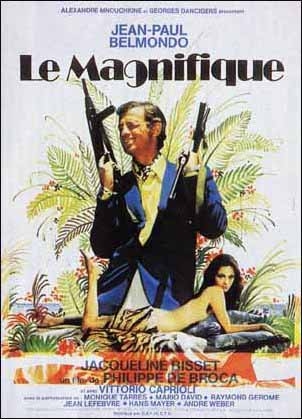 Le Mangnifique (The Magnificent One)
Bob St. Claire is your typical man of action. A man of a thousand talents that range from defensive driving when being chased while on a cliff road, fending off a thousand attackers at once and seducing women with a glance and a smile. Oh, and Bob St. Claire doesn’t exist. He’s the best-selling creation of Francois Martin. A schlubby writer, (is there any other kind?) he sits in his apartment and dreams up amazing stories. Bob St. Claire is particularly obsessed with one female named Tatiana. She looks a lot like the woman who lives above Francois. The movie jumps back and forth from the real world and Francois’ richly detailed fantasy life. The movie is silly. That said, it’s amazingly silly. From telephone booths being dropped in the ocean to murderous Russian Orthodox priests. If you enjoy spy fiction, be sure to check out ‘Le Mangnifique.’

Finding Forester
Coming off the disaster experiment that was the shot-by-shot remake of ‘Psycho,’ director Gus van Sant decided to try something a little more like his previous effort, ‘Good Will Hunting.’

Jamal Wallace is a gifted high school student, but he is having trouble with his writing class. One day while out playing basketball, he befriends the hermit living in the apartment across the way from the basketball court. The hermit is well known but little seen writer William Forrester. Will Forrester help Jamal discover the writer lurking within? Will Jamal help Forrester come out of his solitary cocoon? You want to put money on it?

‘Finding Forester,’ will win no awards for its originality. That said, the story is solid as well as the acting. (I highly recommend skipping the trailer where you are forced to focus on the fact that Sean Connery has the line, ‘you’re the man, Dog.’ At least in the actual movie, it’s not as in-your-face.)

The Shining
Do I even have to say it? No matter, I will. ‘All work and no play makes Jack a dull boy.’ The only two names you need to know with this movie are Jack Nicholson and Stanley Kubrick. Ok, the movie also features Shelly Duval and Scatman Crothers, but, really it’s the Jack and Stanley show. The movie was also one of the first films to use a stedicam, but because Kubrick took so long with his movies, it wasn’t one of the first movies released. Still, because it’s Stanley Kubrick the framing and the use of the stedicam is amazing. -Sam