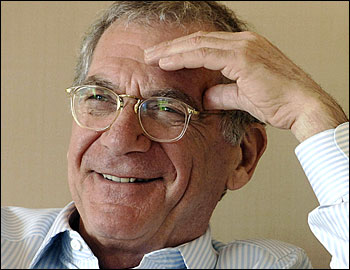 Director and actor Sydney Pollack died Monday in Los Angeles at age 73. Pollack died of cancer at his home, with his family beside him. Pollack won an Oscar for directing ‘Out of Africa.’

As an actor, Pollack appeared in ‘Tootsie,’ ‘Husbands and Wives,’ ‘Eyes Wide Shut,’ as well as the current movie, ‘Made of Honor.’

I have always found the breadth of Pollack’s films impressive. He was equally adept at comedy, drama and action. Some of Pollack’s movies include, ‘Three Days of the Condor,’ ‘The Way We Were,’ ‘The Interperter,’ and ‘Absence of Malice.’

Sydney Pollack will be missed. -Sam