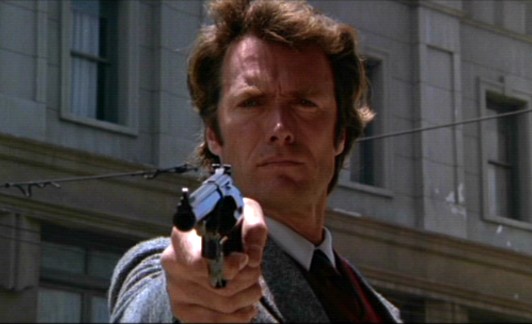 All five of the Dirty Harry movies are now available on DVD and Blu-Ray, in a new boxed set, featuring an impressive amount of extras, including commentaries and documentaries.

As this article begins, I’d like to make a pledge to you, the reader.  I will not say that these movies ‘make my day.’  I will not ask punks if they feel lucky.  I will also not admit that in all the excitement that I kind of lost track myself.  That said, there are five movies.  Are they any good?  Here’s a breakdown:

Dirty Harry (1971)
This was the one that started it all.  Originally a Frank Sinatra production with Ol’ Blue Eyes as the lead, that fell through for Clint Eastwood and director Don Siegel to take the ball and run with it.

A serial killer, based reportedly on the never-caught Zodiac killer, is tormenting San Francisco, and the movie opens with him killing a woman on a roof-top swimming pool with a high-powered sniper rifle.

Harry Callahan is called in to take on the case.  Of course, he makes mince meat of the case.  The poster tagline was, ‘Harry Callahan doesn’t break murder cases.  He smashes them.’  Finally a movie that lives up to it’s ad campaign.  And it ends with what has become, for me, a memorial closing line.  ‘Sometimes a man’s got to know his limitations.’  For me, the best film of the series.

Magnum Force (1973)
Two years later after the first film hit, (and after Pauline Kael called it ‘facist,’) the follow-up movie opened.  ‘Magnum Force,’ was directed by Ted Post and written by future filmmakers John Millus and Michael Cimino.  The story is a bit clunky.  A renegade police officer is going around and enforcing justice on his own terms.  The film features early appearances by Robert Urich and Tim Matheson.  While many think the movie is overlong and over the top, I still like it and consider it the second best Harry film.

The Enforcer (1976)
For me, this is a solid entry in the series, but is shrugged off by many as one of the lesser Dirty Harry films.  Tyne Daly, (Cagney… or was she Lacey?) co-stars as Callahan’s latest partner.  The movie follows the case of the People’s Revolutionary Strike Force.  They wreck havoc all over the city, and end up taking Tyne hostage on Alcatraz Island.  Of course Harry’s there to sort it all out.  I have a soft spot in my heart for almost any movie made during the 1970 decade, and, well, I like this film for that reason alone.

Sudden Impact (1983)
Now, ‘The Enforcer,’ was supposed to be the final part in a Dirty Harry trilogy.  However, a poll by Warner Bros. showed that people wanted more Harry Callahan.  Hence, ‘Sudden Impact.’  The film was the first Dirty Harry movie directed by Clint Eastwood.  It starred his then girlfriend Sandra Locke as a woman tracking down and killing the men who raped her and killed her sister.  The movie is notable because it is considered by many to be the most violent in the series.  It also features the first utterance of the famous line, ‘Go ahead, make my day.’  Of course, Ronald Reagan made this line even better known.  But is it a good movie?  For me, the answer is, not really.  As much as I adore the 1970s, I feel the adverse way towards film in the 1980s.  And, sadly, ‘Sudden Impact,’ falls into that category.  The music and the cinematography both leave something to be desired.  That said, it could be worse.

The Dead Pool (1988)
Oh wait… It is.  A movie director and his friends play a game betting on who which famous people will die next.  Harry is called in to solve the case.  The movie mostly plays like a game of, ‘hey, is that who I think it is?’  Patricia Clarkson plays a news reporter who dates Harry, Jim Carrey plays a rock star, Liam Neeson plays the film director and Guns n’ Roses have a cameo.  It also has a really neat car chase.  (Please see the ‘Three Cool Car Chases’ article for details.)  For me, it’s on the level with ‘Sudden Impact,’ but for completely different reasons.  Of course, a Dirty Harry movie still has it’s own charms.  I like the way Eastwood directs action films.  This is no exception.

So, there you go, the five Dirty Harry movies.  In order of best to worst.  (And completely in order of release.  Funny how that happens.  Well, in the final analysis, I might rank ‘The Dead Pool,’ higher than ‘Sudden Impact,’ but purely for personal reasons.)  While I haven’t seen the Blu-Ray discs yet, I’ve heard they look great.  But no matter how they look, what matters is the content.  And, if you ask me, these five movies deserve a look.  Check it out.  -Sam

One thought on “Dirty Harry: A Retrospective”