Granted, 1988’s ‘The Dead Pool,’ is not the best in the Dirty Harry series and it was one of the first movies to un-leash Jim Carrey on an un-suspecting movie-going audience. But any Clint Eastwood movie is worth seeing at least once. (Well, except for ‘City Heat.’) ‘The Dead Pool’ is no exception. The chase sequence that puts this film on the list starts with Harry and his partner on stake out in their car. A radio-controlled car rolls up alongside them. They look at it with amusement until Harry sees the car drive under his. And then he realizes that there’s a bomb strapped to the kid’s toy. Harry guns his engine and takes off. The remote control car follows. And the chase underway. It is an excellent take off and tribute to all movie car chase scenes as well as a nice homage to the specific genre of car chase sequences shot in San Francisco. (May I recommend ‘Bullet,’ and ‘Magnum Force.’)

John Frankenheimer was a master of the thriller. For proof, may I present ‘The Manchurian Candidate,’ the criminally underrated ‘French Connection II’ and the film currently under discussion? ‘Ronin’ was Franhenheimer’s return to the large palate of feature filmmaking after regaining his footing after a stint direction made-for-TV-movies. ‘Ronin’ is set in France. It involves gun runners, an assassination plot and a lot of car chases. It was Frankenheimer that insisted that all the chase scenes actually be shot and not recreated by green-screen or other computer tricks. When you see Robert DeNiro driving the car the wrong way down the road at 100 mph and Richard Price looking like he’s going to soil his pants as he rides shotgun, that’s actually DeNiro doing the driving and Price doing the soiling. 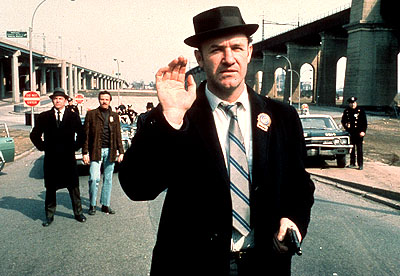 Really, the name of this article should be ‘one cool chase sequence,’ because, without ‘The French Connection,’ there is no article. The film is a masterpiece and always exciting to watch. But it is the chase scene that makes the movie, in my humble opinion, one of the great films of all time. Police detective Popeye Doyle is chasing a suspected member of a drug smuggling ring. He’s gotten on the subway. Doyle grabs his car. And as the subway car makes its way out of the city, into the Bronx on an elevated track, Doyle follows on the streets below. Shot without permits, at full speed and with the cameraman wrapped in a mattress to avoid injury, this is the first and only example one ever needs as to why computer generated effects are a poor replacement for the actual thing. -Sam