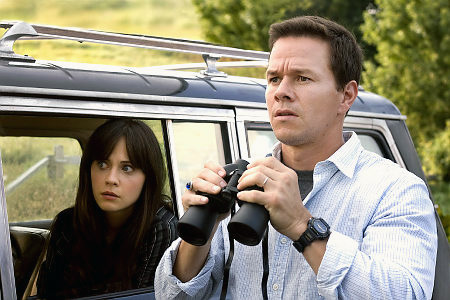 It probably comes as little surprise that almost all of us who write reviews on films harbor some sort of deep, secret desire to pen our own screenplays and see our ideas dance across the screen. And a film like M. Night Shyamalan’s ‘The Happening’ gives all of us hope. Because if crap like this can be written, produced and mass marketed then I know my idea for an animated film about a plucky, young, mildly retarded kangaroo who wants to be a tennis star but doesn’t think he can because of his club foot can make it through whatever half-assed screening process this went through. Actually, I’d consider hiring Mark Wahlberg, too. The sing-songy “I’m going to talk to everyone like they’ve never heard words before” vocal stylings that he used in ‘The Happening’ would be perfect as the narrator for my film.

But not for this one. I’m not sure what teacher Wahlberg was basing his character, Elliot Moore, on, but he may have missed the fact that his teacher was clearly patronizing him. But I’m getting ahead of myself. Elliot Moore is a high school teacher who is interrupted by the principal during his classroom discussion on the disappearance of the bee. It turns out the state of Pennsylvania has been issued a warning that Central Park in New York City has been hit by some sort of terrorist attack and the state is sending everyone home to be safe. Elliot goes home to collect his wife, Alma (played by the surprisingly dead-eyed Zooey Deschanel) and join his colleague Julian as they evacuate the city. But they never get to their destination. The train stops in a middle of nowhere American town and announces it’s not going any further because it lost contact with everyone. As everyone slowly begins to learn that these “attacks” are happening all the way from to , panic ensues as everyone tries to leave the northeast. Revelations are sort of had as to the real cause of the attacks, which cause people to repeat themselves, stop walking, then start walking backwards, then kill themselves. Or just kill themselves.

The rest, faithful reader, I’ll leave for you to find out. Or not. I plead with you not, though. Don’t worry about seeing this movie. For me, Shyamalan has been on a slippery slope downwards ever since ‘The Sixth Sense.’ This film could officially be the final nail in his career’s coffin. The problem with the idea of writing, directing and producing your own films is that, if they fail, the blame falls

squarely on your shoulders. And ‘The Happening’ fails on all fronts. First, the acting. I’m fully aware that Mark Wahlberg is not a truly talented actor. But when he works with a gifted director, Wahlberg can really shine (see ‘The Departed’). Here, Walhberg along with every single other cast member, seem to have been directed to forget everything they’ve ever known about acting, pretend that they’re high school freshmen putting on a performance, and, to be sure everything comes across really poorly, Shyamalan hit them over the head with a blunt instrument just before each take. My love for Zooey Deschanel was truly tested after seeing her give a performance that would have given Howie Long a run for his money in the category of “Best Dull Surprise Expression Throughout a Film.” If the tour-de-force performance of your film is coming from John Leguizamo, you’ve worked yourself into quite a corner.

It could possibly be because what the actors had to work with wasn’t worth the effort. ‘The Happening’ is a half-baked idea. It could have potentially turned into a decent discussion on mankind and Mother Nature’s way of putting balance and order back into her fragile system. But, instead, Shyamalan misses the mark completely and only has these points come across sporadically, and usually by experts on the TVs our heroes are watching as they try to figure out what is going on. Instead of coming across as threatening, eerie or even just kind of thoughtful, ‘The Happening’ drops little moments of exposition and then spends the rest of the time, I kid you not, having Wahlberg and Deschanel outrunning wind. I’ll say that part again: they state that their plan is to outrun the wind. I’m not sure if Shyamalan felt he needed to get something out into theaters relatively quick after ‘Lady in the Water’ but clearly he wasn’t done coming up with the basic idea behind this movie. It almost felt like he hoped that if he threw enough vague ideas onto the screen that the audience would connect the dots themselves and come away thinking that ‘The Happening’ was a thinker. The problem with that is the Shyamalan never gave us any dots. And the script’s idea of character development was to actually have the characters just say what they are. Alma says, “You know I don’t like to put my feelings out there!” only to say, “I’m the same way. I don’t like to put my feelings out there” not 3 minutes later in the same scene.

‘The Happening’ is the exact opposite of what that name implies: nothing happens in this movie. It’s incredibly dull, it spirals into the ridiculous way too early in its 90-minute run time to even give the viewer a hope that a better movie was just around the corner and has some of the most awkward, unintentionally laugh-out-loud moments that I’ve seen in a theater in a long time. Seriously, if you decide to subject yourself to this movie at any point, you’ll know what I mean when you see the lion attack (on an iPhone, none the less). M. Night wants us to believe he’s got something up his sleeve with his first R-rated movie. But unless you think lines like, “I speak in calculus” are scary, you’re better off watching ‘An Inconvenient Truth’ to get a good Mother Nature scare. Al Gore has more personality than this film.

3 thoughts on “Justin Reviews: The Happening”