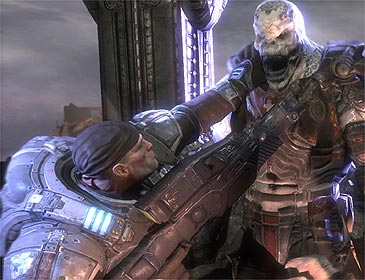 Len Wiseman has signed on to direct ‘Gears of War’ for New Line, based on the epic Xbox exclusive video game. Wiseman will be collaborating with Chris Morgan, the writer behind ‘Wanted,’ and ‘The Fast and the Furious: Tokyo Drift.’

The videogame is about an invasion by a group of aliens known as Locust, and a team of elite soldiers who fight to retake the planet. The game was extremely entertaining  with a unique visual style, and an adaptation has me very excited.

The game is the second biggest seller for Microsoft, and one of the biggest exclusives on the system. The sequel for Gears of War will be out later this year for Xbox.

The games protagonists have some great characteristics, and it’d be great to see a backstory. Despite its lack of realistic application, I can’t wait to see their rendition of the chainsaw bayonet that was such a popular way to mow down your opponents.

New Line acquired the rights last year, they had aimed for a Summer 2009 release, but further development will delay this plan.