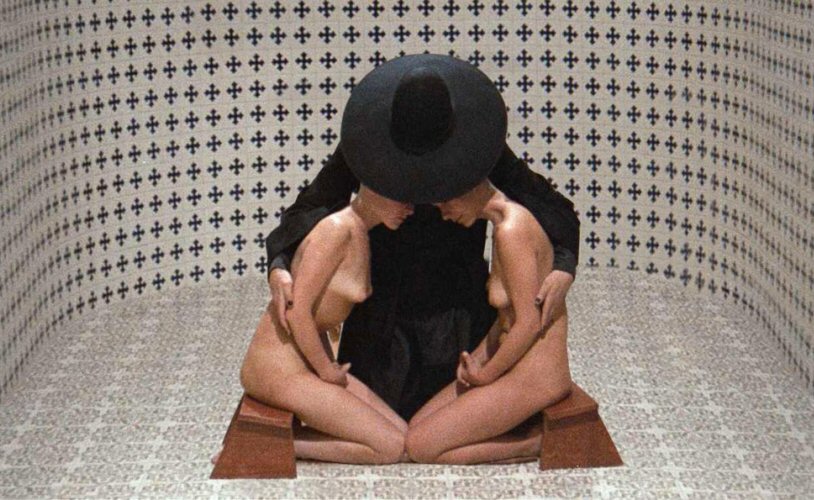 This is not a movie to watch with Mom. Written, directed and co-starring Alejandro Jodorowsky, ‘The Holy Mountain’ is many things. Easily forgettable is not one of them.

Jodorowsky made the film as the follow up to his indie hit, ‘El Topo.’ John Lennon was among the films admirers and he approached Jodorowsky to see if he could help fund his next movie. Lennon ended up funding the entire film. The film remained elusive and available only in bootleg copies after Jodorowsky fought with former Rolling Stones manager, (and film distributor,) Allen Klein. Klein reportedly said the movie would only be released after Jodorowsky died. Luckily, nothing so drastic had to happen.

‘Holy Mountain,’ is light on story. Basically, a thief meets with up with a guide, (played by Jodorowsky,) who introduces him to seven spiritual guides. Together, they try to climb the titular mountain and kill the Gods who live on the mountain and take their place.

The plot is a simple one, and it’s basically 45 minutes until the it actually kicks in. Before that, the stranger is drugged and used as a model for a crucified Christ, a group of frogs dressed as conquistadors who re-enact the conquest of Mexico, and people reading each other’s excrement to determine the future.

The film is also oddly quotable and one could have a very profitable t-shirt company by solely printing up shirts featuring ‘Holy Mountain’ quotes. To wit:

You are excrement. You can change yourself into gold.
Your sacrifice completes my sanctuary of 1,000 testicles.

There’s also a line about rubbing your clitoris on the mountain, but I can’t find an exact quote on-line. As bizarre as the movie is, the visuals are amazing. Tarsem owes his entire career to the work of Jodorowsky. And Jodorowsky does it 1,000 times better than Tarsem dreams of. The film is apparently a low-budget movie and I knew that going in. Yet so many of the film’s set pieces look like huge effects, either an elaborate in-camera effects shot or requiring a large cast and expensive costumes. At every turn, the film simply dazzles and mystifies.

But did I like the movie? I don’t know. Would I recommend it? If you liked ‘Titanic,’ and don’t want to be challenged by film. I would say no. If you only like art movies because your friends do, I would say no. If you’re interested in seeing a movie unlike anything you’ve ever seen before, and could quite possibly melt your face off, I can say enthusiastically say hell yes. –Sam