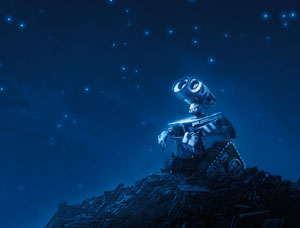 Halfway through the large slate of movies released annually, it can finally be said with certainty: I have seen one of the best movies of the year.  ‘WALL-E,’ the new Disney-Pixar film lives up to the hype and delivers.

‘WALL-E’ tells the story of a waste-collecting robot who lives alone on Earth, trying to un-do the damage done by man.  His name is WALL-E, an acronym for ‘Waste Allocation Load Lifter- Earth Class.’  WALL-E is by himself, but it doesn’t seem to bother him.  As he goes about his day, he picks various remnants on mankind and collects them in his shelter.  If it’s interesting, WALL-E saves it.  Ring boxes, light bulbs, Rubik’s cubes are all fascinating to make the cut.  WALL-E also dreams of meeting other people.  He’s obsessed with the movie ‘Hello Dolly!’ and watches it nightly, tape recording his favorite songs so that he can have something to listen to while going about his work the next day.

And then one day a drone arrives, sent by the humans orbiting the earth to see if their planet has become inhabitable again.  Her name is EVE, short for Extraterrestrial Vegetation Evaluator, and WALL-E is in love.

The movie opens with approximately a half-hour of little to no dialogue.  The storytelling in this segment alone makes the movie worth watching.  Pixar’s animators have made a robot with no real human features something to laugh with, cry with and experience life with.  It is an impressive feat.  With WALL-E and EVE, Pixar has moved into an impressive realm, where characters with very little resemblance to their audience elicit such strong emotions.

The film contains characters voiced by Jeff Garlin from ‘Curb Your Enthusiasm,’ Sigourney Weaver and John Ratzenberger, best known as Cliff on ‘Cheers,’ but now a staple voice in every Pixar film.

However, it is the animation that makes the film stand out.  The depiction of Earth as well as outer space is beautiful.  The film also does a wonderful job incorporating live-action footage into the movie.  Besides the requisite ‘Hello Dolly!’ clips, Fred Willard also appears as a company CEO.  Yet again, not enough can be said about the beauty of the films that are Pixar.

To say any more about this movie would be to spoil it.  You simply must loose yourself in this amazing world and story.  Check it out.  -Sam