No one can accuse Werner Herzog of not being a risky director. While his directorial style doesn’t contain a lot of flash, it is definitely stylized in its ability to capture riveting stories. And no one can accuse Christian Bale of being a personality actor. The man melts into roles like few other “A-list” actors. So a marriage of Herzog and Bale seems like it would be a fascinating, visceral experience. And you know what? It really, really is.

‘Rescue Dawn’ teams Bale and Herzog to tell the story of Dieter Dengler, a US Navy pilot who is shot down on a super-secret mission. Dengler is immediately forced into the jungles of and tries to evade capture by the local militia. After missing a chance to be rescued, Dieter is captured by the militia and ultimately taken to a prison camp (after refusing to sign a document that basically says the US blows) where he meets fellow Americans and detainees. They form a bond over their imprisonment, with Dieter providing hope to the rest as they all endure physical and psychological torture. Dengler eventually rallies the prisoners and forms an escape plan, leaving them free from the prison, but still trapped in the jungle. The film follows Dengler and he tries to make it to and, ultimately, back home.

The film feels very simple. The story itself doesn’t initially amaze when you summarize it, mostly due to the fact that we’ve seen this type of prison escape movie a hundred times already. It’s not until you realize that it’s based on a true story that you have to admire Dieter Dengler’s heart and optimism. And because the film doesn’t rely on flash or groundbreaking story, the burden of engaging the audience lies directly on Christian Bale’s 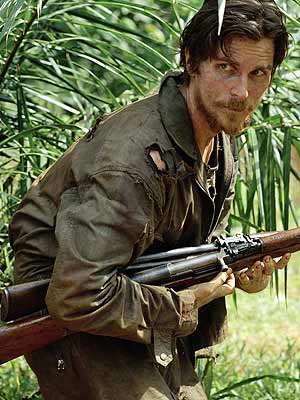 shoulders. As Dieter, Bale is an almost cocky, headstrong, overly confident and optimistic character. At first this is almost an annoying set of personality traits; I found myself not totally liking the character. But by the time they are imprisoned, Bale’s character work suddenly makes sense and fits into this story of survival and the audience not only wants him to be rescued, but actually feels like he could pull surviving in a Laotian jungle long enough to be saved. Enough can’t be said about Bale’s acting prowess and in ‘Rescue Dawn’ Herzog puts most of his eggs into Bale’s basket and it pays off in spades. The supporting work from Steve Zahn and especially Jeremy Davies as Eugene DeBruin, whose emaciated physique eerily echoed the countless images we have seen of starvation amongst prisoners who have been captured for far too long, help carry the film and potentially gives the picture heart where Dieter’s cockiness may have left it slightly lacking. You can’t help but feel for Zahn’s Duane Martin, whose character was so broken by captivity that Dengler literally and figuratively carry him through most of the film.

Werner Herzog’s ‘Rescue Dawn’ is exactly what you’d expect a Herzog film to be. It felt like an evolution from his pieced together documentary, ‘Grizzly Man,’ following a man in self-imposed exile from humanity, surviving with nature. Like I said, we may have seen this story before, but with brilliant casting and a simple, yet visceral, directorial approach, ‘Rescue Dawn’ is an excellent take on a survivalist film and well worth the 2 hours spent watching it.