With the nationwide release of ‘The Dark Knight’ just days away, Warner Bros. released a direct-to-DVD anime film comprised of six anime shorts, each around 12 minutes in length entitled, ‘Batman: Gotham Knight.’ The animated feature was to provide another perspective on the world of Batman that Christopher Nolan created as well as fill in the gap between the events that take place in ‘Batman Begins’ and the upcoming feature.

‘Batman: Knight’ is interesting. I was expecting an intense, action-centric take on Nolan’s version of Batman. And sometimes it was that. In the opening short, ‘Have I Got a Story For You’, Batman is all action. But, like the rest of the shorts, each filmmaker has put his own personal spin on the character and the story. ‘Have I Got a Story For You’ uses the idea that each citizen has his or her own vision of Batman, and recreates that in a way that only animation can provide. From one perspective, he is an actual bat. In another, he is a shadow that can melt into the floor and rise again to pummel the bad guy. And, from another perspective, he is a robot. Each director took note of Nolan’s world and created his own Batman, exploring the character or exploring the effect of that character on the world around him. And that’s really what ‘Batman: Gotham Knight’ seems to be all about: providing different perspectives on the character as he becomes a part of .

The most successful short was least action-centric take on the character. The short titled, ‘Work Through Pain’ discusses Bruce Wayne’s appearing desire to seek enlightenment through meditation, to transcend the pain that comes from both the inside and the outside. After a shaman refuses to teach him because he feels that is “dishonest,” Bruce finds a willing teacher and learns to ignore the pain, then use it. The short as a whole really what Batman is all about: it discusses the psychology of a man who thrives on his pain, is motivated by it and who feels he cannot continue to exist or seek help. This kind of character study is what made Nolan’s Batman so grounded in realism. You feel and understand the human beneath the mask.

But for these character studies, there are also action shorts. ‘Crossfire’ and ‘Deadshot’ play with Batman as the Caped Crusader, the heroic vigilante whose purpose is to protect the people. The stories 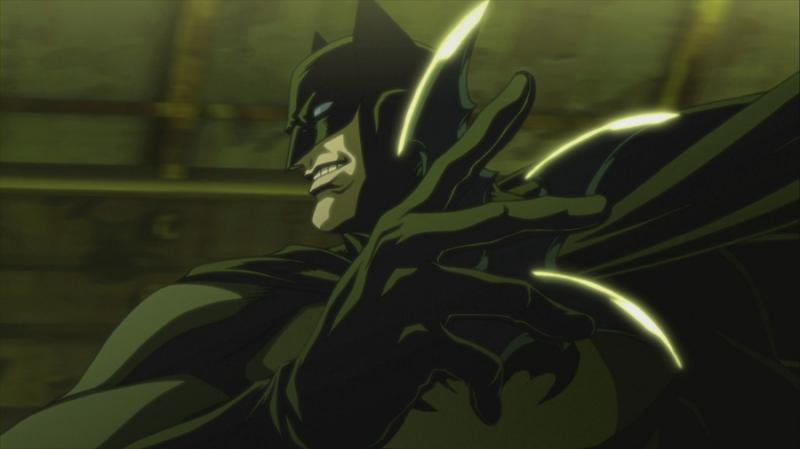 utilize the hyper-real stylized anime medium to fully play up the action potential of Batman as the fighter, the hero. The shorts are fun but, while they sort of touch on Batman’s morals and ethics as a vigilante, they seem to exist mostly to appease the action fans and to introduce characters that will appear in ‘The Dark Knight’ like Sal Maroni. They’re fun, but they don’t seem to add too much other than action pieces.

Overall, ‘Batman: Gotham Knight’ is an interesting approach to continuing this take on Batman through to the next live-action film. The film is sometimes slow and the different looks of the characters from short to short can potentially be jarring in that you don’t get a sense of an overall cohesive piece. And as shorts, they differ in pace and in approach, with some more successful than others. ‘Batman: Knight’ is an interesting viewing and will probably fall into the “must have” for Batman enthusiasts, but for those who were expecting it to directly continue the story of the Dark Knight, it doesn’t really do that. It’s a fun appetizer that’ll hold me over until the main course, but when the check comes, I probably won’t be talking about anything but the steak.