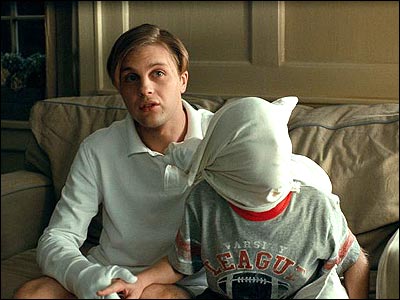 Michael Haneke is kind of a riddle in his 2008 shot-for-shot remake of his own 1997 horror film, ‘Funny Games.’ His film is a criticism on violence in film; it plays out more like a deconstructive essay than it does an actual film, goading the audience on, mocking them for the violence he feels the audience is craving. On the other hand, ‘Funny Games’ has enough more than effective nods towards horror film standards that you have to wonder how many horror/violence-riddled films Haneke has absorbed to be able to create and execute these scenes so well.

The film follows George and Ann Farber who, along with their son Georgie, head to their lake house for a few weeks. It’s there that they eventually meet Paul, a clean cut young man clad in all white. Eventually they meet Paul’s counterpart, Peter, who stops by the Garber’s house to ask for some eggs. After a few “mishaps” with the eggs, the stoically polite duo eventually reveal their true motive: they plan on toying with and torturing the family as a game. After breaking George’s leg, the two bring the frazzled family to the room and make a bet with them that they will not make it to see 9am the next morning. And so begins the real purpose of Haneke’s film: to force the family through grueling, threatening and horrific situations while giving direct nods to the audience that this is what they really came to see.

The problem with this, of course, is that this is not what the audience came to see. Haneke’s entire premise/I’m-better-than-you-sick-fucks approach is that he seems to have completely missed the point of why an audience likes these types of films. As an audience, we relate to the family, the ones in trouble, not the killers. We don’t root for continuous torture. We get excited and thrilled for these types of films because the play on our fears of being trapped in a similar

situation. The more the family is tortured, the more we relate to them, the more we root for them. We want, hope and expect comeuppance. Sometimes we get it, sometimes we don’t. But the point is that our thrill isn’t around watching and cheering on the attackers, it’s about the thrill of knowing somewhere in the back of our minds that it could be us that this happens to when we go home and a stranger shows up. The more the family is put through, the more we sympathize. This isn’t high caliber analysis of horror films that I’m presenting here. This is pretty 101 stuff, so the fact that Haneke complete missed it makes ‘Funny Games’ feel more like the awkward, nonsensical rant of a zealot than a well thought out argument against the genre. When Haneke has Paul continuously break the fourth wall and turn to the camera to nod to the audience or address us directly with what we’re looking for in the entertainment value of watching these people toyed with or when he actually has Paul rewind the film because a plot twist doesn’t go the way he thinks the audience would want it, Haneke’s nose-in-the-air at the audience becomes more of a nuisance than a well-made point.

It’s kind of a bummer too, because some of the time ‘Funny Games’ is a well made film. The acting from Tim Roth, Naomi Watts, Michael Pitt and Brady Corbet is effective and if the film was re-edited to lose the self-referential scenes and the fourth wall crap, it could very well be a good horror film. But instead, ‘Funny Games’ comes across as a snobbish and sometimes incredibly dull attempt at a point. After the attackers leave the family for a period of time, the audience is left to watch Ann and eventually George languish in the actions of a few minutes prior. And, no lie, we watch Naomi Watts try to stand up and hop away in her underwear for over 10 minutes. 10 minutes! And that’s in the middle of about 35 minutes of non-events. I don’t know if Haneke knows this, but if he planned on skewering the genre with a genre piece, the standard run time for a horror film is usually about 90 minutes, so there was some fat to be trimmed from this 112 minute “expose” on our obsession with violence.

I have to applaud Haneke for trying something with ‘Funny Games.’ While I don’t know that there is a reason for the shot-for-shot remake of the film (other than possibly stating that 11 years later, he still agrees with his point), you have to tip your hat to sometime trying something somewhat original with film. That being said, ‘Funny Games’ fails as a horror film and fails as a commentary. It’s an interesting watch for those who like to be a little high-minded with film, but for those who were looking for a good entry into the horror film genre should look elsewhere unless you enjoy watching one of the actors turn to you and mock you. I know this isn’t so much of a review as it is a critical retort, but as Haneke’s film isn’t so much of a film as it is a visual essay, it seemed only fair to discuss it in this manner. An eye for an eye, Haneke.