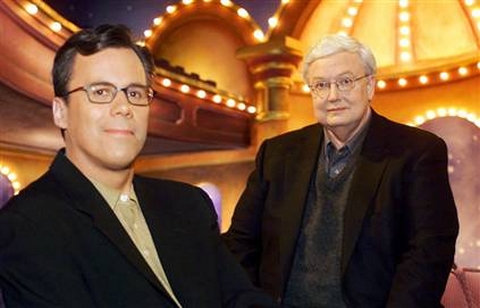 Film critics Roger Ebert and Richard Roeper have announced that they are parting ways with ‘At the Movies.’  The show had been in a state of flux the past few years, what with Ebert not appearing on the program since June of 2006 due to medical problems, and the removal of the ‘Thumbs Up/ Thumbs Down,’ way of rating a movie.

In separate press releases, both Ebert and Roeper say they’ll be announcing plans for some sort of review show shortly.  Hopefully it’ll be together.  As much as I like Richard Roeper’s commentary and analysis on film, nothing can hold a candle to Roger Ebert.  I still love reading his reviews and interviews.  His ‘Great Movies’ series is not to be missed.  If you haven’t read anything by Roger Ebert, run out and buy a copy of ‘Awake in the Dark,’ a best-of compendium that you will find yourself trying to not read through in an afternoon.  Yes, it is that good.

Yes it’s a shame that the show is for all intents and purposes over.  (I can’t see it continuing without either Ebert or Roeper.)  I’m hopeful that the two will work together again soon.  Can’t wait to see what happens next.  -Sam