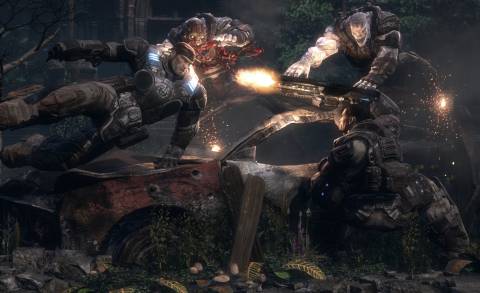 It’ll come as no surprise that I’ll open this article with the following words, here is another one for Justin to groan about.

Legendary Pictures has come on board to co-finance and co-produce Epic Games’ ‘Gears of War.’ The hit video game published by Microsoft has been at New Line since last year.

For those of you who are unfamiliar, ‘Gears’ centers on a world taken over by a group of aliens called the Locust, and a team of soldiers who are fighting to take back the planet. The game is Microsoft’s second most popular franchise, with ‘Halo’ taking the top spot. ‘Gears of War 2’ drops this Fall.

The film is now coming from Warner Bros since New Line was recently folded into them. New Line had aimed for a Summer 2009 release, but no official date has been named.

Personally, I think I’m gonna side with Justin one this one. Gears, though has a decent story for a video game, may not translate well to a traditional non-interactive narrative. There are elements here that if done incorrectly, could follow in the footsteps of the ‘Doom’ movie…and we all know how that turned out.