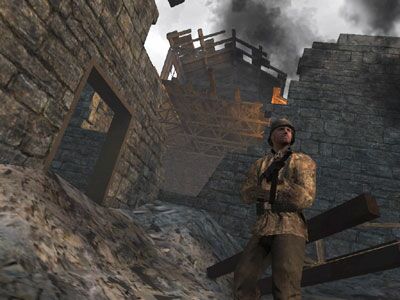 id Software head Todd Hollenshead has been vocal about film adaptations of his video game properties this week. He confirms that Roger Avary (The Rules of Attraction) is currently working on the script for a film version of ‘Return to Castle Wolfenstein’

The game takes place during WWII, and tells the story of US Army Ranger B.J. Blazkowicz, who leads a team into Castle Wolfenstein to investigate the Nazi’s SS Paranormal Division. Roger Avary will also be directing the film.

Let me preface this with this, I loved this game, not so much “Return,” but the original ‘Wolfenstein 3D,’ was a genre builder. It was the first of its kind, and I love looking back to it. That said, I don’t think any movie with a character named worse then some George Lucas’ Star Wars characters is what audiences are looking to see. But, who knows, I’m not sure what sort of send up they have planned for the film, but, I’m definitely keeping my eye on this one.