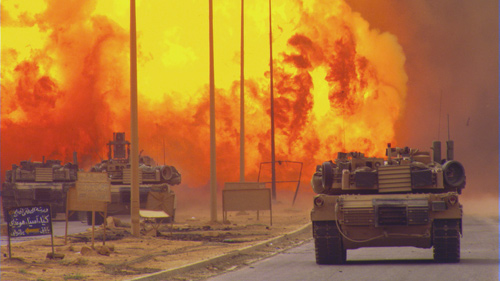 Political documentaries are a sticky wicket. Many seem to try to float by on the idea that their position is the right one and that is enough. That artistry on such a project is not needed or required. Just the facts. It’s hard to not like a movie who you agree with completely on principal, but as a film-going experience leaves you incredibly cold. (I would point to, ‘Outfoxed,’ ‘Wall-Mart, the High Cost of Low Living,’ and to a lesser extent, Alex Gibney’s Enron movie.) Riding up out of nowhere comes ‘No End in Sight,’ a movie that is tight, insightful and incredibly well made. This is a movie.

The film recounts the US invasion of Iraq and what happened (or didn’t happen) after Baghdad fell. Many people involved on the ground, talk first-hand about what they saw. The film is populated by Amerians, bewildered by the actions of their country’s leaders. Why was no martial law issued, leaving troops to standby and watch as looting went on? Why did no one guard the national archives and library and why were 7,000 years of world history and artifacts burned to the ground? Why did Paul Bremmer issue three key points shortly after his arrival in Iraq, all of which incensed the locals? Why did Donald Rumsfeld downplay things in his press conference, again leaving Iraqis to feel like no one understood what they were seeing?

This film is not out to point fingers, or blame the Bush administration. In fact, it is even handed, simply stating the facts and allowing the audience to draw its own conclusions. After a slew of indictments are leveled against an administration member, usually the screen fades to black with a title card reading, ‘Dick Cheney refused to be interviewed for this film.’

And that’s what makes this project so strong. It simply hands out length after length of rope and lets the guilty parties hang themselves. There’s no one else to blame. The case against has been made. Now people need to be held accountable for their actions. The prosecution rests. -Sam