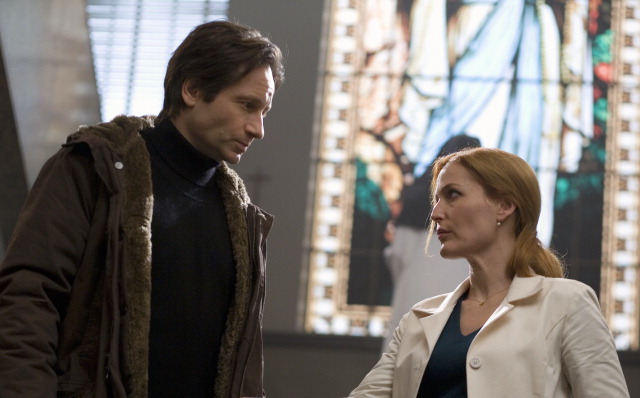 So I didn’t rush out to see this one. And I was surprised at myself, I was a die-hard X-Files fan growing up, and I dug the first feature film, though I will admit, following Duchovny’s exit from the series, I stopped tuning in. But, the series holds a place near and dear to my heart, and a part of was really bummed to see the new film do so poorly.

The film reunites David Duchovny and Gillian Anderson as Fox Mulder and Dana Scully. The X-Files have been closed for years, and the two have moved on. Mulder is living in hiding, and Scully is a staff physician at a Catholic hospital.

The film opens, much like the show, with a thrilling teaser, a group of FBI agents is using the help of a self-proclaimed pyschic who has information involving the whereabouts of an abducted FBI agent. Though, in usual FBI fashion, they are sketpical of their psychic, so they seek Mulder’s help.

Scully convinces Mulder to come out of hiding to aid in seeing whether the psychic, a pedophile former priest (played very well by Billy Connolly) is legit.

Mulder, who at first approaches the case uninterested in helping the FBI, cannot hold back his inner curiosity, and involves himself full force in the investigation. Perhaps, like the priest, with something to prove.

It is still clear, that even after 10 years, both Anderson and Duchovny know their characters very well. Their chemistry, and sexual tension is just as strong as ever. It was a pleasure seeing them together again.

As far as having Amanda Peet and Xzibit in supporting roles, I felt they were slightly distracting, but forgivable.

The strength in the series in my opinion wasn’t the alien story arcs, but the ones that involved the strange and the creepy, the monsters, and the paranormal. ‘X-Files: I Want to Believe,’ is like one of those episodes. This film captures the spirit and feel of the series perfectly, which is no surprise, the film was directed, co-written, and produced by series creator Chris Carter. Is it brilliant filmmaking? No. Will it please fans, absolutely.