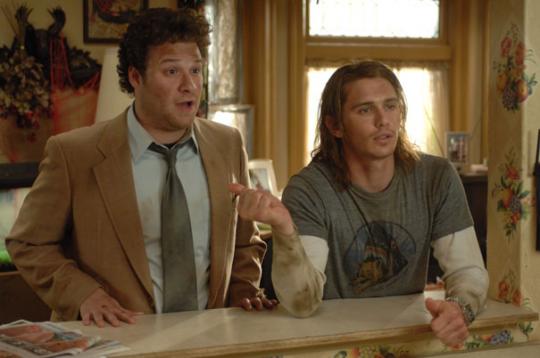 Pineapple Express was one of the handful of movies I was legitimately hyped for. I was a huge fan of ‘Superbad,’ written by Seth Rogen and Evan Goldberg. So, on paper, there was good reason to be excited about this one. Same writing partners, Judd Apatow producing once again. So what happened, why didn’t it meet my expectations?

The film is about Dale Denton, a 25-year old stoner, living a humble life serving subpoenas and court orders to unsuspecting folks, often donning disguises to get the people to admit their real names so that he may go about his business. Dale’s dealer, Saul, sells Dale a rare strain of marijuana called Pineapple Express.

Dale smokes the dope, and witnesses a gruesome murder by Ted Jones, a man Dale was supposed to serve. The rest of the film is Saul and Dale on the run from these drug dealers and their cronies.

So what was wrong with the film? ‘Pineapple Express’ was terribly formulaic, and its  jokes just weren’t that funny. What made ‘Superbad’ so great for me was the realism in its dialogue. Granted, some of the situations were a bit ridiculous, but, there was something endearing about that film. ‘Express,’ fails on all counts.

Don’t get me wrong, it wasn’t a terrible film. Franco and Rogen were great to watch, but, there just wasn’t enough going on to pull me into the film. It was fun seeing Apatow regulars show up in different parts in the film (the Asian doctor from Knocked Up, Bill Hader, etc.). Also David Gordon Green is a bit of an nontraditional director for a comedy, but I did like the look and style of the film.

Overall, I was definitely dissapointed, the trailers showed so much potential. Usually I’m the first to pick up an Apatow produced film on its DVD release, this is the first one I’m content with just catching on cable.

One thought on “Review: Pineapple Express”