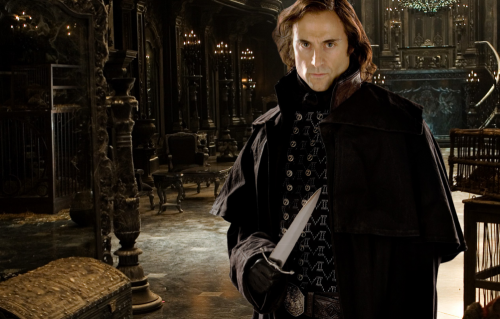 As Guy Ritchie continues pre-production work on his take on the Sherlock Holmes story, word has come that he has cast British actor Mark Strong as Holmes’ constant foe, Professer Moriarty. Strong has previously appeared in the upcoming Ritchie film ‘Rock-N-Rolla,’ as well as Ritchie’s pal (and former producer,) Matthew Vaughn’s ‘Stardust.’

Holmes will be played by Robert Downey Jr., who, if they announce tomorrow that he’ll be playing Rebecca of Sunnybrook Farm, I won’t bat an eye. I am now pretty much convinced this guy can do anything.

I’m a fan of the Holmes stories and interested in seeing what Ritchie can do with the characters. Say what you will of ‘Revolver,’ or ‘Swept Away,’ but both ‘Lock Stock,’ and ‘Snatch,’ showed that Ritchie knows his way around a camera. -Sam