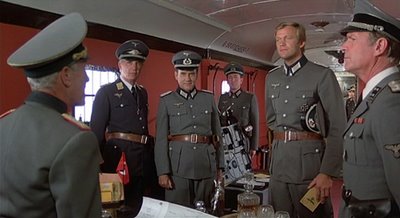 With Quentin Tarantino finally getting pre-production started on his seventh feature film, attention has been re-focused on the 1977 Italian film from which Tarantino took his title. Enzo G. Castellari’s ‘Inglorious Bastards,’ is, like Tarantino’s promises to be, a ‘men on a mission’ film.

The movie is essentially a re-make of Robert Aldrich’s ‘The Dirty Dozen.’ As the film opens, a group of American soldiers are being shipped off to military prison. Their crimes are numerous and varied. Murder, theft, disobeying orders. They are a motley crew. However, mid-transport, the convoy is attached by the Germans and its every man for himself. Everyone who was not under arrest is killed and it is the convicts who are the sole survivors. They band together to form a group whose only goal is to get to Switzerland and freedom.

The film has several set pieces, each one well executed and well established. There’s a raid on a mountain-top castle. An attack on a train. And the continual travel across farm-land, trying to outfox the Nazis using only their wits.

This is one of those films that is the sum of many unimportant, or poorly put together parts. To put it another way, this movie shouldn’t work, but it does. Wonderfully.

The cast, headed up by Bo Svenson, Peter Hooten and Fred Williamson, do their best with the standard material, but it’s the dubbing that, no matter what they do, sometimes makes them look a little foolish. There’s also the issue of sets. One can spot some of the low-budget work-arounds that don’t always look 100% realistic. A blown-up building is clearly a model and prospective is given by lighting them on fire and having them run around really far away from camera as the model is in the foreground. The plot is cookie-cutter at best, completely over-the-top at worst.

All of that being said, I had a blast with this movie. It sucks you and and makes you love it. And it is the kind of love that allows you to overlook or forgive everything I mentioned above. You are quickly sucked into the story and hold on for the ride. I am always telling people about how I love all kinds of movies, even the damaged ones that no one really loves. This is one of those films. It makes me want to track down some of Enzo G. Castellari’s work. Clearly, he made this film with love. And that’s what comes across in every frame.

My only concern in recommending this movie so highly is that when you finally see it, you’re going to be disappointed that it’s not a great World War II movie. What other movie, might you ask, feature a scene with women bathing naked in a pond and then running out and grabbing their machine guns for a firefight? That description sums up the movie perfectly, in a way. Ludicrous, over the top and simply delightful.