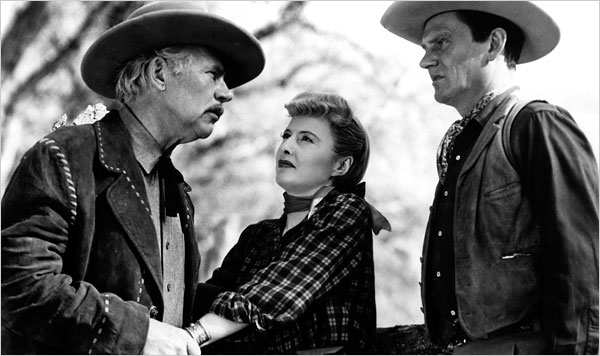 Anthony Mann is known for his edgy westerns and large-scale epics.  ‘The Furies,’ is a sort-of combination of both genes, a western-based large-scale family drama.

Walter Houston stars as T.C. Jeffords, the owner of ‘The Furies,’ a large ranch in New Mexico.  He’s loud and blustery and knows best.  His wife died years ago, but he is always true to her and she is always in his mind.  His daughter Vance is her father’s right hand, taking the daily running of the ranch on herself.  T.C. is slowly failing in his business, but doesn’t want to let on to anyone, perhaps even himself.  He starts issuing ‘T.C.’s’ I.O.U.’s and tries to put a brave face on the situation.  However, he finds himself forcing his daughter out of his life and leading her to do whatever she can to regain the family estate.

The film also shows the separation between generations as T.C. wants the Indian interlopers off his land, while Vance understands that perhaps there is a place for them in this new world.  Vance also sees beyond the edge of The Furies, seeing that strong book keeping and cunning are necessary as much as the ability to run a ranch well.

‘The Furies’ is the type of movie they don’t make anymore.  It’s rich, strong, moving and epic in style and tone.  (But not in length… In fact, ‘The Furies,’ is under two hours long.)  Barbara Stanwich plays Vance with charm, wit and cunning.  She’s loving and caring, but still bears the scars of someone feeling betrayed.  It’s a wonderful performance.  Walter Houston in his final role is everything that you expect from a Walter Houston role.  (In discussing this movie with a friend, he asked me if Walter Houston ever played anything other than old, cranky guys.)  This is a performance on-par with his Oscar winning role in ‘Treasure of the Sierra Madre.’  Houston embodies the old-school rancher, unable to see how the world around him has changed and expecting his children to be nothing but loyal and obedient.

Criterion distributed this re-issue and it is wonderfully done.  Packaged with the original book the film is based on and featuring really interesting behind-the-scenes footage, this is the best the film has looked.

There’s not much more I can say about this film.  It’s great.  I love it.  It’s my newest discovery of a long-lost film.  Check it out, keep it from getting lost again.  -Sam