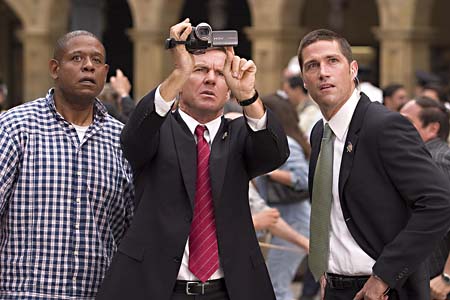 ‘Vantage Point’ is one of those films that has the potential of being a serious hit or miss. But, there wasn’t enough to get me into the theater when it was released earlier this year. Boy was that a mistake!

The film is the feature debut of director Pete Travis, and features a great cast, Dennis Quaid, Forest Whitaker, William Hurt, Sigourney Weaver, and Matthew Fox. The film tells the story of an assassination of fictional U.S. President Henry Ashton while giving a speech in Spain. Rather then telling the story in traditional narrative structure, it gives you the story via the different perspectives of the characters involved, the news crew, the Secret Service Agent, the local police, etc. Hardly an original idea, but, very well executed by Travis and writer Barry Levy.

The film opens with the news crew, which basically sets up the whole event and introduces some of the main plot points. The President is in Spain for an anti-terrorism summit, he is introduced by the mayor of city, and is shot twice as he’s stepping up to the podium.

With each perspective, we’re given a bigger piece of the puzzle, and just when you think, okay, where is this headed, they twist it a little more to keep you interested.

The film is very fun and entertaining, and its short running time adds to its, “why not check this out” status. It was a shame the studio released it in February, as it would have been a much better end-of-summer fair then what Hollywood did end up releasing this year. So all-in-all, if a good thriller is you’re cup of tea, pop this in one weekend afternoon and have some fun!