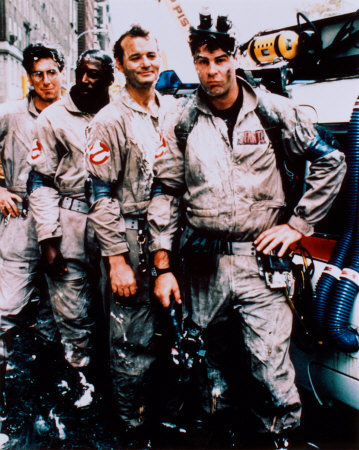 In an interview at FantasticFest, Bill Murray spoke about his involvement in ‘Ghostbusters 3.’

“Well, I think the wounds from Ghostbusters 2 have healed. Supposedly they have hired two guys from The Office to write a script. So, that could work. I think that is a good idea. Maybe they will give us a fresh look at it. I’ve always liked our characters. Our characters are funny. We had a lot of fun making the movies. The first one was really a lot of fun to make. But I worry.

I think the first forty minutes of Ghostbusters is about as funny as a movie gets. It didn’t have a lot of special effects in it. There were just a couple. It was just about those funny characters in that world. And I liked that movie. I think the first one had sixty plate shots, or something like that.

The second one had hundreds. The special (effects) guys got their hands on the script early, and it was just gone. It went away. The script just went away. And it was hard to wrangle, because it was tied all around the effects. It wasn’t about the story coming first, or the characters moving through it.

They are hard movies to write, and Dan really caught it with that first one. He really caught it. The characters were fun to do. I did the video game this summer, and it was fun to do it again. I found myself walking down Fifth Avenue, singing that song. And people were like, ‘God, that guy is really full of himself.’ So, there you go.”

Personally, I hope he does it. The video game release is apparently in trouble. Ghostbusters 3 really could go either way, it could go down the Indiana Jones, this isn’t really necessary path, or, hey, it was a risk but it came out awesome. It’s interesting what he says about the sfx on Ghostbusters 2, I don’t think they could get away with little SFX on a new movie. I think the only way they could do this right, is to have the whole cast back. So if you big-time producers are listening, we’re your audience, and we say, all-or-nothing, and don’t make it if its gonna suck.