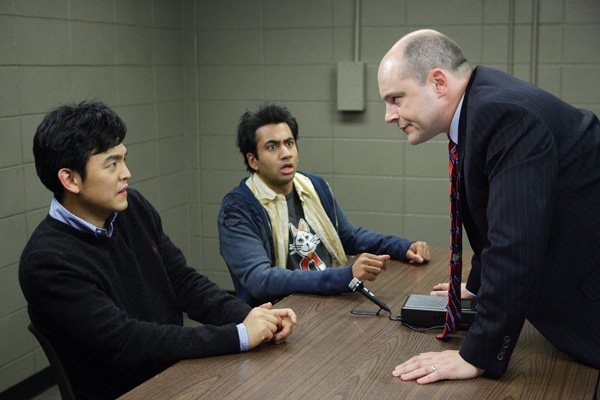 The film features Kal Penn and John Cho reprising their roles made famous in ‘Harold and Kumar Go to White Castle.’ It picks up the day after their insane adventure, as the two are packing to head out to Amsterdam so Harold can continue the budding romance between him and his neighbor, Maria.

‘Escape,’ wastes no time poking fun at racial profiling, and lax security at American airports. Kumar, in his infinite wisdom, smuggles a “smokeless bong” into the plane. However, trouble (and hilarity) ensues as an old lady mistakes Kumar lighting the bong, as lighting a bomb.

Air Marshall’s take the pair down, and after an interrogation by a certifiably insane/idiotic representative of the Department of Homeland Security (played by Rob Corddry) the two are sent to rot in Guantanamo Bay.

Of course, this wouldn’t be a buddy movie if they didn’t find a way escape, and embark on a road trip to find someone to save them from the Government, who is one step behind them.

There isn’t too much one can say about the movie, you either like and are entertained by the humor (which I was), or you’re not. I did find the movie as a whole funnier then its predecessor, and as far as recent stoner comedies go, I enjoyed it more then ‘Pineapple Express.’ But again, these movies aren’t for everyone. I think both actors are more then comfortable in their roles, and the whole thing looked like it was probably a lot of fun to film.

Ultimately, if low-brow/gross out humor, coupled with nudity, sex jokes, drug use, drinking, and fart jokes are your thing, rent this. If not, I’m sure Netflix has more serious fare for you.