Skip to content
home Feature, Movies ‘Cool Hand Luke’ is Cooler Then You 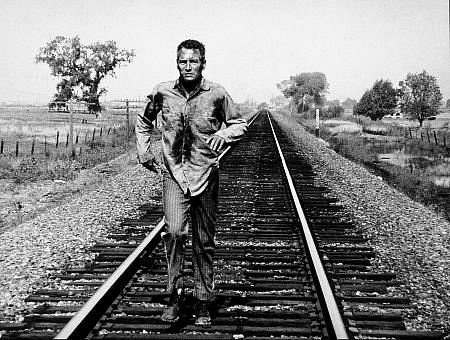 I am considered by most to be the coolest human being to ever exist. Maybe it’s because I have long flowy locks of hair, or maybe it’s the Fonzie-esque way I snap my fingers and 17 girls show up, but whatever it is, I tend not to argue. I am super cool. Fact. And, in reality, there are only two other people on my level: Steve McQueen and Clint Eastwood who could kill seven people with only two bullets left in a six-shooter. If I left it at that, you wouldn’t be able to complain. You might try to mention that Tom Selleck should be up there, and you’d have a case, but with his coolness riding so heavily on his need for a mustache, you cannot include him. However, if I did leave it at that I would be forgetting the one person who is cooler than I. He is without a doubt the coolest person to ever walk this great Earth. He is a man so smooth with the ladies that he could impregnate them with just a glance. A man so tough he wrestles dinosaurs with his bare hands on the weekends, just for something to do. He is none other than Paul Newman. (All of those Samuel L. Jackson people out there need to take their Kangol hats and sit back down. Paul Newman could out cool him any day.)

Paul Newman rose to fame in the 1950’s and hasn’t looked back since.

His first film was a movie called ‘The Silver Chalice’ that he proclaimed to be “the worst movie of the entire 1950’s decade.” Following that disaster though, he ended the 50’s by churning out hits such as ‘Somebody Up There Likes Me’ and ‘Cat on a Hot Tin Roof’. Throughout his career he continued to star in quality films that underlined his inner suave: ‘The Sting’ (which, if I ever start smoking, will be because of this movie, and I will not blame Mr. Newman for that, rather I will thank him), ‘Butch Cassidy and the Sundance Kid’, and ‘Cool Hand Luke’. Each one of these shows the ease and cool with which he plays the role. If the key to being cool is to act like you’re not or don’t care if you are considered cool, then Newman defines this to a T. Look at the scene from ‘Cool Hand Luke’ where he is playing poker with his

new friends in the chain gang. He calmly bluffs his way to winning the hand then smoothly announces “sometimes nothing can be a real cool hand.” The thing is, the “nothing” Newman has is everything you need in order to be cool. He doesn’t gloat, barely cracks a smile, he casually moves on to the next order of business, “just passing time.”

Off screen, the man is just as rad, setting the bar in style that continues today. The well fit suits that are now back, the casual wear that defined all-American. He was the standard and still is. The effortless he appeared to have in his everyday life made him accessible. He is Johnny Everyman, if Johnny Everyman was a super awesome actor with looks and over $200 million in charitable donations. Basically the question is: What can’t this guy do?

There are things you can’t put your finger on when it comes to defining cool. Why is one person considered cool and another not? It is because the other person isn’t Paul Newman. He is that rare breed of man that can make woman love him and men want to be him without hating him for unknown reasons. There is no hyperbole too outlandish to describe the aura of this man. In fact you could say to me that Paul Newman is so cool he has a Ferrari for a penis and I’d believe it. And I don’t care who your dad is, if Paul Newman wanted to, he could sleep with your mom.

*Note: This Article is a Repost