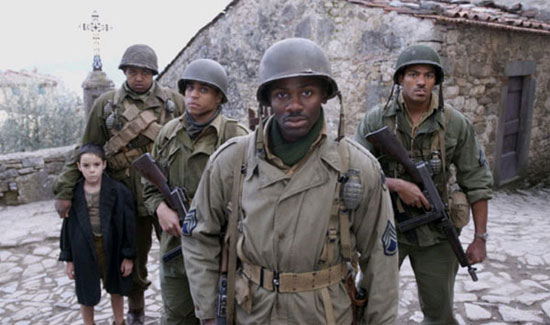 Spike Lee loves to stay controversial, his new film ‘Miracle at St. Anna,’ is finding itself be criticized by the Italians for its alleged “revisionist” take on events. The film spotlights the role of African-American soldiers during WWII, in which an Italian partisan named Rodolfo collaborates with the Nazis, indirectly sparking the slaughter of 560 Italian civilians.

Following a press screening in Rome, director Spike Lee and writer James McBride fielded questions on the film. McBride apologized to the crowed, saying he was sorry if he offended the partisans, “As a black American, we understand what it’s like for someone to tell your history, and they are not you…But unfortunately, the history of World War II here in Italy is ours as well, and this was the best I could do.”

Spike Lee took a different road, telling the press “I am not apologizing for anything. I think these questions are evidence that there is still a lot about your history during the war that you (Italians) have got to come to grips with…This film is no clear picture of what happened. It is our interpretation, and I stand behind it.”

Needless to say, like our own mixed domestic reviews, the film was not received well by Italian critics.