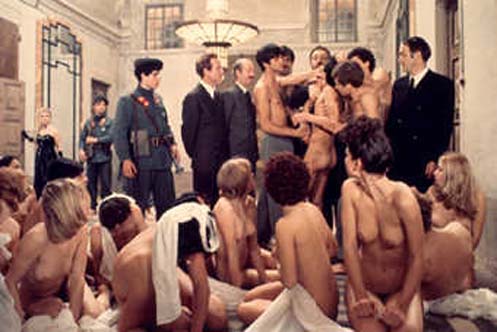 Pier Paolo Pasolini’s ‘Salo, or 120 Days of Sodom,’ is a difficult film to review.  Not necessarily because of it’s challenging and unblinking content, but because of the controversy that has surrounded the film since the day the production wrapped.

Director Pasolini was run over twice and killed by a male prostitute shortly after finishing shooting.  Images of Pasolini’s horribly mangled body were run in newspapers alongside images from his most recent film.  After finding a DVD release as part of Criterion’s prestigious collection, the film quickly went out of print, with copies of the film going for hundreds of dollars on the second-hand market.

Set in Italy during the final days of World War II, the story is about four dignitaries who round up sixteen boys and girls and then steal away to a remote villa with nothing but the most vile plans in mind.  The film is a virtual laundry list of terrible and disgusting behavior.  Rape.  Incest.  Beatings.  Degradation.  Torture.  Excrement eating.  (Don’t see this movie on a full stomach.)

The children are rounded up, stripped and then, once inside the villa, start every day with a story from a lavishly dressed older woman, who gleefully recounts their early years spent as a prostitute.  The children are sometimes pulled away from the main hall by one of the dignitaries, who will rape them, or make them endure some other strange kink.  Or the whole group will be forced to endure some bizarre tableau concocted by the men.

In no uncertain terms, it is disgusting.  However, Pasolini is too talented a filmmaker to simply present these vile scenarios for no reason other than to titillate.  He is trying to say something about the human condition.  Combining the end of the war with the Marquis de Sade’s ‘120 Days of Sodom,’ is a masterstroke and in another filmmaker’s hands would have been a mess.  Perhaps that filmmaker wouldn’t have gone far enough.  What makes this film a success is Pasolini’s refusal to compromise.  It an unabashed depiction of unspeakable horror.  You either appreciate what he is trying to do, or you don’t.

However, as strange as it is to say this, I kind of wish the picture wasn’t so pristine and the history of the film wasn’t so well documented on Criterion’s new two-disc set.  With a booklet featuring diary entries by a friend of Pasolini’s, detailing his visits to set, and a second disc with several documentaries about the movie, including one by BBC film critic Mark Kermode, the film is almost too well explained.

If I had run across this movie in film school as a bootleg copy, with terrible subtitles, a muddy transfer and no information about the history of the production, this movie would have scared the hell out of me.  Who made this?  Why did they make it?  How did they get a cast and a crew to agree to help make this?  However, in this latest edition of the film, with a pristine print, one almost feels the film is too well explained.  If sunlight is the best disinfectant, the film seems too clean.  With such a well documented history, some of the horror is awaited.  Sometimes the best way to see a film is knowing nothing.  -Sam