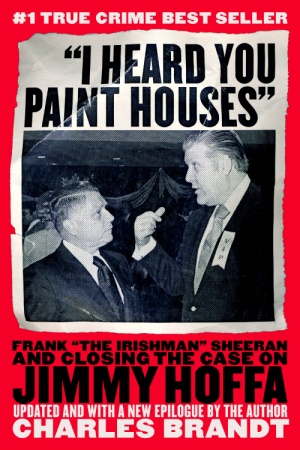 Variety is reporting that Martin Scorsese and Robert DeNiro may work together again in  new film called, ‘I heard you paint houses.’

The film is based on the book of the same name, about Frank ‘the Irishman’ Sheeran, who confessed to killing many people, among them, teamster boss Jimmy Hoffa shortly before Sheeran’s death.  The title comes from mob slang for contract killings and the resulting blood on the floor and walls.

The script is reportedly being written by Steve Zaillian, who wrote ‘American Gangster,’ for Ridley Scott and co-wrote ‘Gangs of New York,’ for Scorsese.  Zaillian also won an Oscar for writing ‘Schindler’s List.’

Scorsese is also considering a few other projects, after having just wrapped ‘Shuter Island,’ which he worked with Leonardo DiCaprio… again.  This sounds promising.  I had heard there was a falling out between Scorsese and DeNiro and maybe the ice is thawing a litle?  -SamS