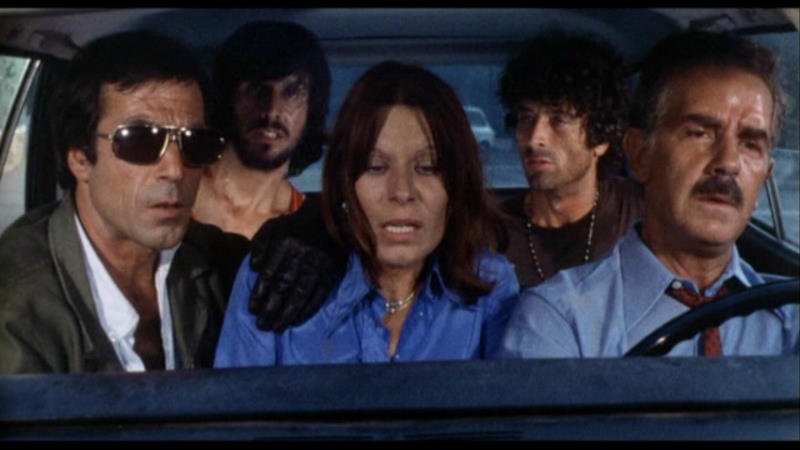 For much of his career, Mario Bava was either up or down, fighting to make the movies he wanted to make, and ending up compromising and making movies that he had to make. Along with ‘Lisa and the Devil,’ ‘Rabid Dogs,’ was another pet project, coming late in the director’s career.

Unfortunately the film was not without it’s problems. The main financial backer for the project was killed in an automobile accident and the film sat on the shelf for years, with audiences unable to see it. After Bava’s death, his son Lamberto and lead actress Lea Lander teamed up to make sure ‘Rabid Dogs’ was seen. Lamberto, unfortunately, also went out and shot additional shots, adding new music as well to the score and releasing his version as ‘Kidnapped.’ Both films are now readily available on one DVD. Only one of these films is worth your time.

‘Kidnapped’ is one movie on a short list of films that brilliantly exploit their tight, claustrophobic setting. There is Humprey Bogart’s ‘The Desperate Hours,’ set in a house, Roman Polanski’s ‘Knife in the Water,’ set on a boat and Bava’s ‘Rabid Dogs,’ set almost entirely in a car.

As the film opens, three crooks are racing away after stealing the weekly payments from a small drug company. Several people are killed in the heist and the crooks take off running to a nearby parking garage. There, they encounter Riccardo, a father taking his child to the hospital and Maria, a woman coming from shopping with a friend. The friend is killed in a standoff with police and both Riccardo and Maria end up captives in the escape from police.

As they head out from the city to get away from police, the tension builds. Thirty-two and Doc, two of the robbers, (all have code names,) start to bicker about who’s in charge and how best to treat their hostages. Doc is trying to behave as humanely as possible, however Thirty-Two is of a different mind, obsessed with humiliation and having a mental advantage over his captives. When Maria makes them pull the car over for her to relieve herself, Thirty-Two makes her do so in front of him. Later on, he attacks her in the car, presumably planning to rape her.

The tension builds to a satisfying conclusion, with Bava adding his own twist to the story in is final frames. When one reads the above description of the action, perhaps one thinks that this is an exploitation film, cheap thrills as the expense of the actors and the story. However, in the hands of Bava, everything is presented in a way that adds to the suspense and is not included simply to titillate.

‘Rabid Dogs’ is Bava’s final masterpiece. With a free reign to tell the story in his own manner, Bava creates a brilliantly paced and shot film. His love of the zoom is, of course, present, but is used carefully and wonderfully. The mere fact that Bava is able to keep the tension building in such a small, confined space is a testament to his brilliance. While some of his earlier great films take an appreciation in Italian cinema to fully understand their excellence, ‘Rabid Dogs’ is a movie that grabs even the casual viewer from the first frame.

Note: The Lamberto Bava produced ‘Kidnapped,’ is a terrible re-working of the material. The younger Bava went and shoot additional scenes, and added a new score. These additions seem cheap and pointless. To say nothing of ruining some of the suspense. In ‘Rabid Dogs,’ Mario Bava drops you right in on the action of the heist and doesn’t give you time to catch your breath. With ‘Kidnapped,’ Lamberto Bava keeps cutting back to police maneuvers, thereby defusing the tension rapidly. Avoid ‘Kidnapped,’ but, by all means, check out ‘Rabid Dogs.’ -Sam