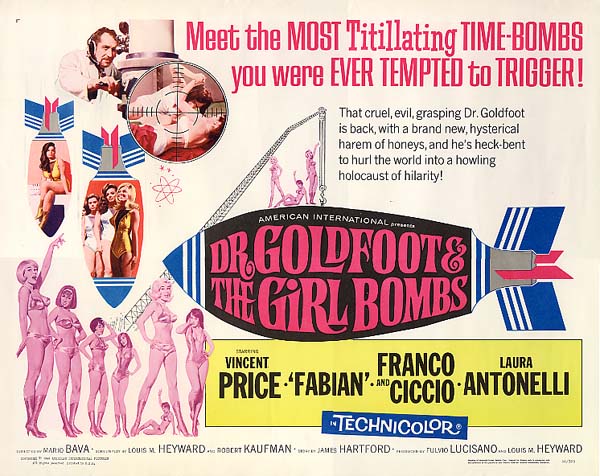 The sub-title for this long-winded movie could have been, ‘well, we all gotta eat.’  In 1966, saddled with a contract that he wanted out of, Mario Bava agreed to take on ‘Dr. Goldfoot and the Girl Bombs,’ for producer Fulvio Lucisano.  The film is a follow-up to the US hit, ‘Dr. Goldfoot and the Bikini Machine.’  (Didn’t see it?  No worries, it isn’t an award-winner.)  Vincent Price was hired to reprise his role as Dr. Goldfoot and Italian comedy duo Franco and Ciccio were brought on to help sell the film to European audiences.

As the film opens, army generals from a number of different countries are exploding.  What is going on?  What is causing their combustion?  Agent Bill Dexter is on the case.  Well, former agent Bill Dexter.  He used to work for the Security Intelligence Command, but was kicked out for having a little too much fun with the ladies.  On Dexter’s trail are Franco and Ciccio, who think he is a spy.

It turns out that Dr. Goldfoot is causing the explosions.  He has created robot women filled with explosives.  When the generals make a pass at them, they blow up.  Every general except one is dead.  The one remaining NATO general is General Willis, who, it so happens, looks just like Dr. Goldfoot.  The bad doctor’s plan is nefarious: Goldfoot will kill Willis and then take his place on the NATO board, and giving himself control of the whole world.  (Cue the diabolical laughter.)

Vincent Price gets off a few lines of quality, but there is little for him to work with.  Franco and Ciccio are a poor man’s Laurel and Hardy and spend every moment on screen doing something that is trying so hard to be funny, it is truly painful to view.

Obviously, there wasn’t much for Bava to work with.  (He even tried to pull out of it, but the producer had him under contract for one more film.)  Bava supposedly improvised much of the film with the actors after the script proved to be as terrible as he had feared.  The film is rife with blatant sexism and, worst of all, it’s unfunny.  You can see Bava trying to tweak sexual politics in a why that he’d do much better in ‘Four Times That Night,’ but here it’s just terrible.  The use of fast-motion and overwrought sound effects makes one wonder just who the audience was to be for this.  No one over the age of 12 would find such pratfalls funny.  No one under 12 would enjoy everyone drooling over the scantily clad women.  The film does feature many of Bava’s in-camera special effects and one can sense that he truly tried.

Made in the 1960s, this is the film that Austin Powers was parodying.  Girls dance in bikinis in the background of many scenes just because and the trumpet-led band music is all over the film.  It’s incredibly corny and is probably viewed now only during one of those ‘so bad it’s good’ weekends of film viewing.

The American version of the film, also sadly bears little resemblance to Bava’s original work.  After turning it in, Bava saw the film re-written, re-scored and re-cut.  I’ve read that the Italian version is a little better, but it’s hard to imagine it being much worse that this.

One can see Bava playing with comic stereotypes and colors and it’s definitely a test-run for ‘Diabolik’ on somebody’s else’s dime, but, even with the 85 minute running time, it is a trial to sit through.  Watch it only if you’re a complete-ist, or, something heavy has fallen on your foot and you can’t reach the remote to change the channel.  -Sam