Skip to content
home Feature, Movies, Retro Reviews A Bunch of Bava: The Mask of Satan

‘The Mask of Satan’ (also sometimes known as ‘Black Sunday,’) was Mario Bava’s first directorial effort and even to this day, it is still highly regarded as one of the pinnacles of horror filmmaking. Shot on a modest budget, the movie shows Bava’s ingenuity as well as his unique eye for framing and camera angles.

As the movie opens, Princess Asa is being put to death for practicing witchcraft. She is tied to a stake, and then the mask of Satan, (an iron mask with spikes on the inside,) is driven into her face. Her body is then burned. 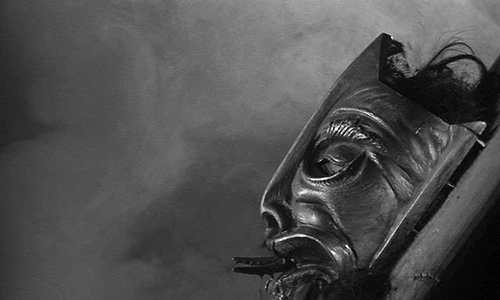 200 years later, Dr. Kruveian and his assistant, Dr. Groobec, end up inside the tomb of Princess Asa, after their carriage breaks down. Kruveian points out how there is a glass window in the coffin, and a crucifix affixed to the top of the coffin. (This is so that the Princess’ body will always have a view of the cross and it is believed that she will never be able to rise and continue her vengeance.

However, when fighting off a bat, Kruveian accidentally breaks the glass and the cross. (He even ends up cutting his finger on the glass. While Kruveian and Groobec go back to the carriage, the blood is seen dripping down into the coffin and things begin to stir.

Outside the chapel, the doctors meet Princess Katia, a direct descendant of Princess Asa. She tells them how her father has let the chapel and the tomb fall apart. He is afraid of it, she says.

That night, Princes Katia, as well as her father and brother, see a painting of Princess Asa change in their mansion. She is alive and back for vengeance.

Dr. Groobec comes to the forefront, falling in love with Katia, and doing everything in his power to save her and put an end to the vampire that is haunting the family.

‘The Mask of Satan,’ is indeed a landmark film and one can see the steady hand of Bava at work, even in just his first outing. While the story is a little shop-worn, it is Bava’s handling of the elements that make the film thrilling.

The opening execution sequence alone is still shocking and incredibly well shot and cut. The final shot, where the mask is nailed into place, still shocks because of the use of blood. (The American distributor would trim much of the blood from the movie.) Bava doesn’t seem to restrain himself in any areas, which makes for a much more exciting movie.

The love story is old and by-the-numbers, and Bava can’t seem to do much with it to make it sing. (Possibly because he was more interested in the vampire storyline.)

Bava shoots Barbara Steele, the actress playing both Princess Asa and Katia with a special glow, so that the camera, and thereby the audience, seems to be under her spell.
The movie also touches on themes that Bava would spend the rest of his career exploring. ‘The Mask of Satan,’ shows how a curse can destroy and tear apart a family. Indeed, by the end of the movie, there is not much of the family left standing. This theme would go on and appear again in Bava’s movies, ‘Knives of the Avenger,’ ‘Kill, Baby… Kill!’ and most dramatically in ‘The Wurdalak,’ sequence in ‘Black Sabbath.’

‘The Mask of Satan,’ is the beginning of Bava’s career and a good place to start your exploration of his work. The technical aspects of the movie still wow and excite and Bava has your interest held from the first frame to the last. -Sam