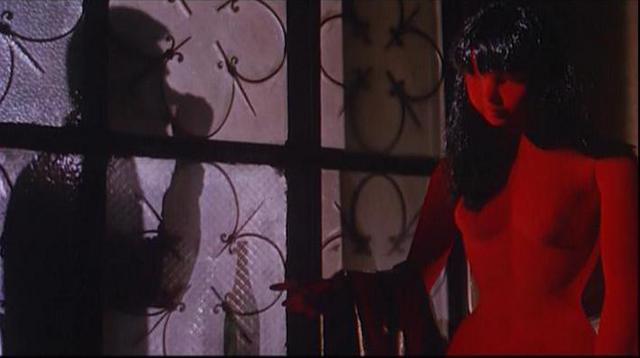 With the success of ‘Black Sunday,’ and ‘Black Sabbath,’ Mario Bava was given full creative control over his next film, 1964’s ‘Blood and Black Lace.’  The producers of ‘Blood’ expected a basic murder mystery film, but Bava, in being true to himself, delivered something else. ‘Blood,’ ended up being one of the first giallo films, which ended up focusing on the chase and the kill, rather than the mystery.  Giallo, is the Italian word for ‘yellow,’ but refers to a popular brand of paperback books, which were published with yellow covers.  The genre is usually horror-based, and features all sorts of nastiness.

As the film opens, Isabel, a model at the Haute Couture fashion house is brutally murdered.  When the police arrive, they find a business filled with people taking part in all sorts of activities, including blackmail, corruption and drug abuse.  It comes to light that Isabel kept a diary which, it is believed, documented all of the various abuses.  The diary ends up in the hands of Nicole, who promises to bring it to the police, but while visiting her boyfriend’s antique shop, is killed by the same murderer who killed Isabel.  However, the murderer finds that Nicole is no longer in possession of the diary.  The murder then heads out to find out who has the diary, or to see if Peggy really did burn the incriminating evidence, like she claimed.

The movie is known as the first-ever slasher film, but it is definitely more than just that.  (Bava later expanded on the slasher genre, with ‘Bay of Blood,’ which ended up being basically a blueprint for the original ‘Friday the 13th,’ down to several of the exact same kills as ‘Bay.’)  Bava is interested in the characters and their motivation.  In ‘Blood,’ no one is what they claim and completely untrustworthy.

On top of the characters, there’s also some incredible camera work.  One of my favorite shots in the film occurs early on, as everyone rushes around backstage at a fashion show, while a handbag sits in the center of a table, the object of everyone’s focus, even though they’d never admit it.  Bava frames character’s heads inside the straps of the bag, and puts it in the foreground as everyone runs around it.  He also has several really great tracking shots, that move back and forth between the dressing rooms, accomplished, in the pre-stedicam days by placing the camera in a child’s wagon and having it pulled around the set.  The costumes are also wonderful, with the killer’s faceless mask the exact same as the mannequins that fill the couture house.  Everytime the camera lingers on one, the viewer worries that perhaps one of them will come to life.

Bava also creates a wonderful color palate that makes the whole film really sing and make full use of its Technicolor film.  The look was later borrowed by Martin Scorsese for his remake of ‘Cape Fear,’ and fellow giallo ateur Dario Argento for his ‘Susperia.’

Sometimes it’s hard to appreciate just what exactly Mario Bava is doing as so many of his tricks and effects are second nature now.  One wishes they could go back to the opening of such a film and see it with fresh eyes so that one could truly appreciate the genius that is at work.  However, for a good quick thriller, ‘Blood and Black Lace,’ more than fits the bill.  -Sam