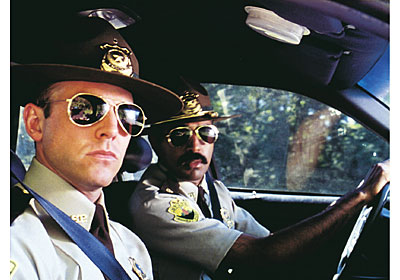 Speaking with MovieWeb, Broken Lizard members Jay Chandrasekhar and Paul Soter have confirmed that they are currently writing a sequel to their cult-hit comedy ‘Super Troopers.’

What could a sequel possibly be about?

“The big picture is that we are on the Canadian Border. And in reality, what has happened is that the government has found places where the markers were off, or wrong. And there are these areas of land that were thought to be Canada, but are actually part of the US. We are enlisted to patrol this area that was always thought to be Canadian soil. But no, it is actually the United States.

We are enlisted because they have to send someone there to help make it part of the US territory now. We get recruited to be the highway patrolmen there. And we are surrounded by all of these Canadian people that aren’t happy about this. We essentially have to impose US law on a bunch of Canadians that aren’t at all happy about it.”

There are also rumors that the plot will also comment on the lumber industry’s security procedures.

The group is currently prepping to shoot their latest movie, ‘The Slammin’ Salmon,’ about a former boxer who runs a restaurant and starts a contest with the wait staff to see who can earn the most tips in one night.

The ‘Troopers’ follow-up sounds interesting.  However, it really doesn’t matter what the plot is.  Will it be funny?  -Sam