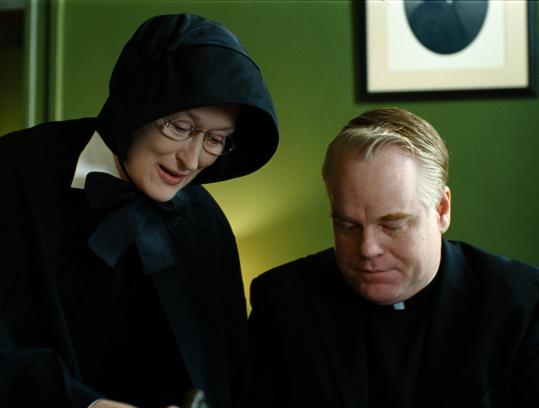 John Patrick Shanley returns to the director’s chair with this adaptation of his Pulitizer-prize winning play, ‘Doubt.’  (For those of you who remember such things, Shanley’s first film was ‘Joe vs. the Volcano.)  Shanley’s second film, is, clearly, worlds away from his first.

‘Doubt’ tells the story of Sister Aloysius Beauvier, played wonderfully by Meryl Streep, the headmistress of a Catholic school in New York. Sister Aloysius rules with an iron fist.  The kids at the school live in fear of her as she watches over from her perch of an office.  She was married years before, but he was killed during the second World War and maybe she’s swallowing her anger and upset and forcing it out at the kids.

Sister James (Amy Adams) is a new nun at the school who is trying to learn how to stay true to her faith, but also remain true to who she is as a person.  Also at the school is Father Brendan Flynn, (Philip Seymour Hoffman,) who seems to friend to many of the kids at the school.  He’s the shoulder to cry on when Sister Aloysius maybe goes overboard.

Then it happens.  Sister James begins to suspect that Father Flynn is becoming too close to Donald Miller, the school’s only African American student.  Flynn calls the boy to the rectory and when he returns to class, Sister James sees that the boy is shaken and there is alcohol on his breath.

She confesses her worries to Sister Aloysius, who begins the search into what actually happened and if Father Flynn is indeed a predator who needs to be stopped.

‘Doubt’ is a showcase for acting.  Meryl Streep, Philip Seymour Hoffman and Amy Adams all turn in excellent performances.  The camera work, with DP Roger Deakins is good, but there is some question as to what Shanley is trying to say.  Why is much of the film shot from around corners and stairwells?  It is this type of questions that eventually hamstring the whole film.

The movie is good, but one leaves wondering what the deal was?  The question of who is right looms large, but there is never any answer.  Perhaps this is the kind of film that requires an audience to reach their own conclusions.  However, Father Flynn’s side is poorly argued and defended, leaving one to sympathize with Sister Aloysius, but to what point.

Basically, the movie is a shoulder shrug of a situation, leaving one to focus on the acting.  Streep, Hoffman and Adams are all excellent.  But it’s not enough to require one to see ‘Doubt’ in the theater.  The movie is a wonderful display of acting work, but it’s not truly worth the trip to the theater.  Wait for the DVD.  -Sam