Skip to content
home Movies, News Golden Globes Given Out 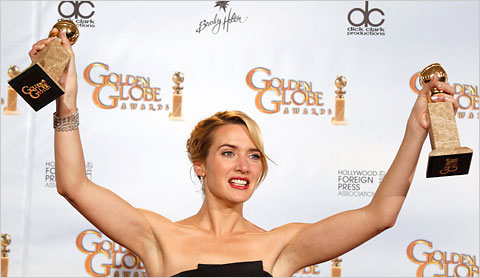 The Golden Globes got to hold a party last night, after last year’s was forced to be canceled by the writer’s strike.  Does this have any bearing on the Oscar race, or is this just a chance to see celebrities drunk?  I’m not sure.  My impressions are below, followed by the full list of winners.

1) Does Kate Winslet love Leonardo DiCaprio more than her husband?
2) It was very cool to see Heath Ledger win, and Christopher Nolan’s speech in memory of him was very nice.
3) Steven Spielberg’s acceptance speech for the Cecil B. DeMille award was also quite nice.
4) I love Alec Baldwin.
5) Apparently the voters enjoyed ‘John Adams’ as much as I did.
6) Even if nobody laughed, I thought Sasha Baron Cohen’s Madonna joke was wonderful
7) It was great to see to look of excitement and joy on everyone’s face as ‘Slumdog Millionaire’ won big.