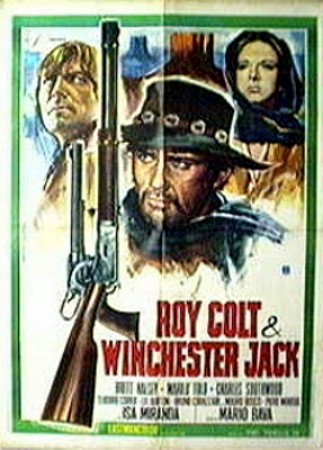 Not every filmmaker gets to do only what they want.  Sometimes they take movies to get a paycheck.  And, as we have seen in this look back at the films of Mario Bava, this is more often than not the case where Bava is concerned.

‘Roy Colt and Winchester Jack’ seems to reek of a movie that is made to get a paycheck.  Produced in 1970, the same year that Bava released ‘Hatchet For the Honeymoon,’ a movie that was more in keeping with his oeuvre.

The plot, insomuch as there is one, is about two friends, Roy Colt and Winchester Jack.  They start out as enemies, as they both race to find a cache of buried gold.  They also come across a priest-turned-thief/sexual-deviant.  What, you’re not laughing yet?  It gets better.  There’s also a native American who helps both Roy and Jack, and yet at the same time, also plays them against each other.

The introduction of the Indian woman is probably the most interesting part of the movie.  Most of the Italian westerns that I’ve seen seem to skip over the ‘manifest destiny/kill all the Indians’ mission statement that all to often pops up in American westerns.  One of the things I enjoy most about foreign-made westerns is the focus on the individual and the toughness required to live in such conditions instead of focusing on killing as many Indians as possible.

That last paragraph contained more ideas than the film we’re discussing.  There’s a fight in a whorehouse.  There’s people running around in their underwear.  There’s a priest that’s all crazy.  If these concepts seem funny, I highly recommend the movie.  If they don’t provoke a chuckle, you may want to seek your laughs elsewhere.

However, the film isn’t a complete loss.  Bava, acting as his own cinematographer, adds some nice visual touches to the proceedings, working with focal length and depth of field a number of times.  Bava has several shots in the film where he puts someone’s face in the foreground, (often filling half of the frame,) and an object in the background, and both are in focus.  What makes this film at all interesting is Bava’s framing.  And it isn’t all that interesting.  This one is for Bava fanatics at best.-  Sam