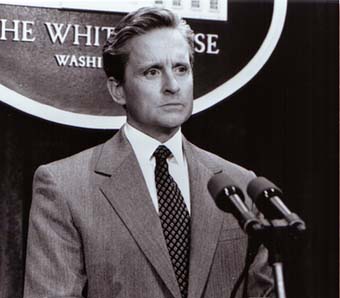 Here it is, inauguration day.  While there are some who didn’t vote for Barack Obama, I think it’s pretty cool to see the transfer of power and to see the promise and excitement that seems to be everywhere.  (Except my supermarket.  They’re still bitter, bitter people.  I double checked this afternoon.)  Here’s a look at three great political movies that might help extend some of your inauguration fever.

All the President’s Men
Well, it’s not a election movie, but damnit if it isn’t exciting.  As good as Dustin Hoffman and Robert Redford are, the true star of the movie is William Goldman’s script.  I mean, you know how it ends and it’s still a thrilling and exciting movie until the final scene.  Director Alan Pakula was a master of creating suspense through sound, and ‘President’s’ is, in my opinion, his masterwork.  If you don’t know the story, here’s the short-short version.  Guys break into office.  Lowly reporters investigate.  Turns out guys were employed by the President.  Lowly reporters fight against large group of people trying to keep them down.

The Candidate
Again, Robert Redford in a leading role.  Redford plays Bill McKay, a candidate chosen by a Democratic election specialist to go up against an incredibly popular incumbent Republican.  Even though he’s the son of a former governor, McKay could care less about politics.  However, as McKay sees the polls predict a trouncing, he ends up ignoring some of his beliefs and instead focuses on winning at all costs.  Sure, the movie’s rather bleak, but, sometimes, hell, usually, the political situation is kinda bleak.  Even though, it’s also really funny.  It co-stars Peter Boyle, who is one of my favorite actors, especially his 1970s film work.

The American President
Why not end this list with a  Frank Capra-esque romantic comedy.  Michael Douglas stars as a recently widowed president who falls in love with a lobbyist.  Written by Aaron Sorkin, ‘The American President,’ is a sort of primer for his wonderful TV show, ‘The West Wing.’  You’ve probably seen this film, or at least, part of this film.  It seems that you can’t turn on TNT or TBS without seeing this one pop up.  However, the optimistic and hopeful tone of the film is a perfect answer to ‘The Candidate.’  Make it a double feature and watch both films.  However, I highly recommend you end with this one.  You’ll finish up the night with a warm feeling.  And that’s something everyone is in favor of.  -Sam