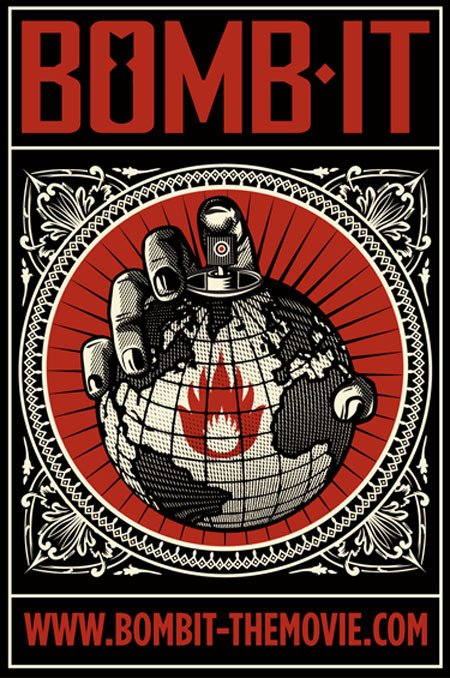 Starting in the early 1980s, the practice of ‘tagging,’ adding your name or nickname to signs, walls and subway cars began to take off in a big way in New York. What began as a black sharpie on a surface quickly evolved into bold shapes and styles, spray paint cans to add color, and a much larger canvas.  Soon, subway cars were almost completely covered in various tags and images.  Is graffiti art?  Or is it vandalism?  Is there any individuality to it?  These are all questions that are tackled by Jon Reiss’s documentary, ‘Bomb It.’

The film opens in New York and shows the evolution of the art form, and then moves around the world, showing how each different group changed and added their own view.  Moving from London to Cape Town, to Los Angeles, you can’t fault the movie for covering a large palate.

However, there is a larger problem.  There is no true movement in the film.  Each sequence is basically, ‘here’s another group of people tagging things and talking about how it’s their right.’  However, there is very little attention paid to the legality of it, and when it is introduced, it’s seen as a downer.  Should you be able to spray paint anything you want because it beautifies an area?  What about the owner of that property?  Maybe if it’s a large corporation that is considered evil, than tagging their building is okay.  But what if it’s a storefront with a local owner, who has to pay someone to remove the ‘art’ on a regular basis?

‘Bomb It’ doesn’t do a good job addressing this which is, basically, the main debate over the art form.  It is clearly on the side of the taggers, and doesn’t make it a fair fight.

The editing of the film is great, and Reiss does a great job, bringing to life the artwork of the various taggers.  For example, one French artist paints rats on building.  Reiss brings these rats to life, overtaking the city, swarming it with rats.  The music is also wonderful, adding live and vibrancy to the film.

But in the end, the film doesn’t reach any level of understanding or new ideas about the art form.  Instead, it simply rehashes the same ideas that are presented in the first five minutes of the film.  If this is all it does, the question is, why should I watch past the five-minute mark?  ‘Bomb It’ doesn’t have a good answer to this question.  -Sam