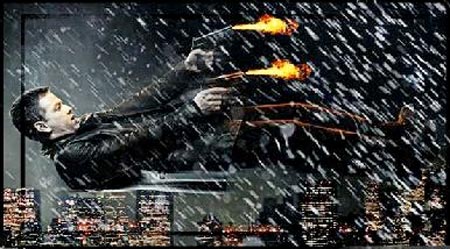 I’ve seen some terrible films in my day, but I’d say I’ve been on a fairly good streak. I have managed to avoid most of the past years truly bad movies, until now. I blame my curiosity, I blame my desire to one day see a decent adaptation of a video game. After my viewing of ‘Max Payne,’ on DVD, I know that day is still far, far away.

‘Max Payne,’ is the adaptation of the excellent video game published by 3dRealms and developed by Remedy Entertainment. The game was fairly ground breaking in its day, bringing gameplay inspired by Hong Kong’s action cinema, and story worthy of some of the best noir. For some reason or another, director John Moore and writer Beau Thorne was unable to translate this to the big screen.

The film tells the story of NYPD Officer Max Payne (Mark Wahlberg), a veteran cop whose life has been consumed solving the murder of his wife and child a few years prior. Payne falls into a strange situation with a woman he meets named Natasha Sax (Olga Krylenko), who after being kicked out of Payne’s apartment, turns up dead. Payne is the prime suspect, but it is quickly revealed to him that Natasha’s murder has a connection to the murder of Payne’s wife. The more Payne investigates, the more questions arise. The deeper he goes, the more deceit he finds.

Unfortunately, there isn’t much to the movie, the events that occur are completely predictable, all we really have is a very pretty looking film, sadly, beauty is only skin deep. A huge problem I had with the film I unfortuantely can’t give away without a spoiler, but I will say ‘Max Payne’ has some of the weakest “villians” I’ve ever seen in a movie.

What’s good about the film? Mark Wahlberg was an excellent casting decision, he’s perfect as Payne. The film captures the atmosphere and feel of the game very well, but it fails at building a connection to the audience.

Should you see this? Probably not. If you played the game, that might be the only reason to see it, but purely from curiosity. Otherwise, save yourself the time (it’s less then two hours but even that is too much) and money.