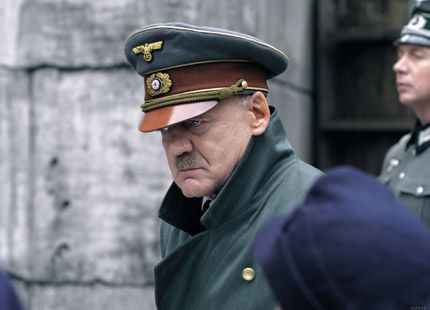 It is no surprise that most of the films we see as American’s about WWII are centric to the Allies fight, very rarely do we get a glimpse to what it was like on the other side. I was excited about ‘Downfall’ because besides a few notes from History books, I had no idea what it would have been like to be on the losing side of the war. That is where ‘Downfall’ begins.

The German/Austrian film was directed by Oliver Hirschbiegel, and written by Bernd Eichinger, who used various books and memoirs (including that of Hitler’s Secretary Traudl Junge who appears as one of the man central characters) to assemble the stunning script. The film opens with a short clip from the 2002 Austrian documentary ‘Blind Spot: Hitler’s Secretary,’ then moves right into 1942, with Hitler (Bruno Ganz)  picking Traudl Junge (Alexandra Maria Lara) from a group of young women to be his personal secretary.

We then move forward to April 20, 1945, Hitler’s 56th birthday, with the Soviet army 12km from the center of Berlin. Hitler has put “Clausewitz” into effect, and we see papers being burned, and artwork moved, and Himmler moving out of Berlin (Ulrich Noethen), planning to surrender to the Allies.

It’s fascinating to see Hitler and his inner circle, still holding to their ideal, while the world around them is clearly crumbling. The film contains some disturbing imagery and action, all motivated by their dream of the Third Reich.

When I rented the film, for some reason I thought it’s only focus would be Hitler’s story, but the subplots are really what make this film. The story of SS Doctor Ernst-Günther Schenck (Christian Berkel), Joseph Goebbels (Ulrich Matthes) and his family, the Hitler Youth that were fighting in Berlin, I could go on forever.

The film is excellent at not necessarily picking a side, but presenting the events as neutral as possible. Hitler is portrayed as he was remembered by the way the memoirs the film was based showed him. A man with an idea (as messed up an idea as it was), holding on to his beliefs (as disturbing as they were), despite the doubt by his inner circle that they had any chance of continuing on. One of my favorite parts of the film was when one of his General’s remarks about Hitler’s orders that he is ordering counterattacks to armies that exist only on maps.

With excellent performances, art direction, cinematography, and writing, as far as this reviewer is concerned, this is the definitive film about the downfall of Hitler, and the Nazi party.

One thought on “DVD Review: Downfall”