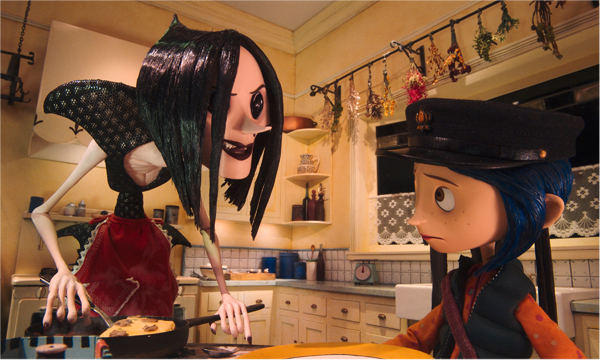 There are times in history when you simply know you’re in the midst of greatness.  Sitting and watching Henry Selick’s adaptation of Neil Gaiman’s popular children’s book “Coraline,” you realize quite quickly that you are watching the beginning of a new era of cinema.
“Coraline,” tells the story of a young girl, who moves in to a creepy old house with her parents.  After driving her parents crazy with questions and pleas for entertainment, she is ordered to explore the house and take inventory of the doors and window.  On her search, she finds a small door in the living room that has been wall-papered over.  She opens it and finds a brick wall.  Later that night, she gets out of bed, and opens the door again, but this time, she sees a tunnel.  She crawls through it and finds herself in an alternate reality: one where her parents are happy to see her and the neighbors aren’t scary or creepy, they’re wonderfully eccentric.  The one discrepancy with this other world is the fact that everyone has buttons over their eyes.  Coraline tries to dismiss it at first, but on one her later journeys, she finds the true story of the other world, and she must work to free the lost souls before she runs back to the arms of her oblivious parents in the real world.

Director Harry Selick, best know for “The Nightmare Before Christmas,” has built an amazing stop-motion world.  And, with this film being shown in theaters in 3D, he outdoes himself.  What’s most impressive is the way Selick uses 3D; it’s not a gimmick and there’s not things pointing out at you all the time, (though every once in a while something does, but you kind of feel Selick can’t help himself,) it’s a way of adding an extra layer of texture and depth to the story.  The real world feels tight and claustrophobic, while Coraline’s other world is wide and expansive, with helicopter flights and  high-wire acrobatics.  One of the best sequences in the film is when Coraline goes to visit Mr. Bobinsky, the upstairs Russian neighbor who loves mice.  In the other world, he is a ringmaster in a Busby Berkley-esque show, where the mice form themselves into letters to spell out Coarline’s name.  This isn’t the typical theme-park 3D, chock full of gimmicks and cheap thrills.  This is 3D in the hands of someone who is simply using it to expand their visual palate.

Neil Gaiman is considered to be a great storyteller and, while I’m not familiar with his work, the movie certainly bears that out.  The film is charming and touching and also, truly terrifying.  What worse fear could a child face, other than to find that their parents aren’t their real parents?  Gaiman deals with such a question in an inventive way, but in a way that doesn’t shy away from the horror and fright.  It’s a story that respects a child’s intelligence and says, you’re completely right to feel that worried.  Your fears are well-founded.

Like I mentioned before, Selick’s use of the third dimension in his storytelling is wonderful.  It is this element that stands alongside the rest of the high achievements in this film.  It doesn’t overshadow the other elements of the movie, which is a true feat.

There are a slew of movies coming out that are in 3D, in a desperate attempt to get audiences to go to the theater and not stay home and wait for the movie on Blu-ray.  But it is in the hands of people like Selick that you see the form being used as another weapon in an arsenal, and isn’t being thrown around in a cheap, tawdry gimmick.  3D like this will stick around and stay fresh.  Things jumping out at you won’t.  If this is the future of 3D film making, I am no longer hesitant or worried.  My concerns that film going would devolve into a world of trombone playing knife wielders was unfounded.  In hands like this, 3D is beautiful.  There are new worlds to explore and new ways to tell stories.  Film going could return to event status, where the theatrical experience simply has to be seen to be believed.  Maybe we’ll return to the proper balance of things: where home video (in any form) is good, but the theater is better.  There is a whole new world of film making out there now.  I just hope filmmaker’s don’t screw it up.  -Sam