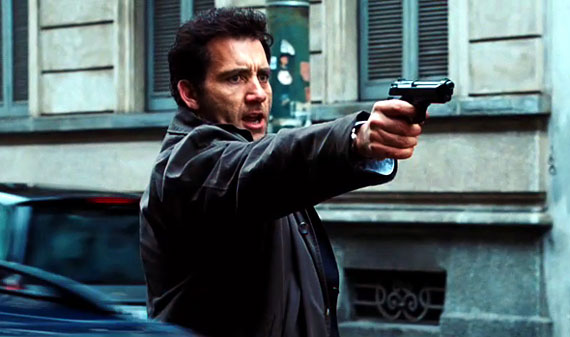 Honestly, I hadn’t heard boo about ‘The International’ until just two weeks ago. I was browsing the high-def content on apple.com, and I came across an “exclusive” scene from the film. I was interested immediately. The film is directed by the very talented Tom Tykwer (Run Lola Run) and stars Clive Owen and Naomi Watts.

The film opens with two folks meeting at a train station in Germany, one of the men is from the Manhattan District Attorney’s office, the other, an executive from an International Bank known as the IBBC. The executive is willing to inform on the shady business his bank takes part in, as long as the price is right. In a sudden turn of events, the poor man from the DA falls dead, right in front of INTERPOL agent Louis Salinger, who is also working on this case.

Salinger, has been after IBBC ever since his previous investigation while he was at Scotland Yard was shut down abruptly. Assistant District Attorney Eleanor Whitman (Naomi Watts) flies out to Germany to meet with local officials, and Salinger to investigate what they suspect as an assassination.

‘The International’ is an action thriller that features a very complex and engaging plot. The idea of a bank participating in such less then honest business practices (given the nature of the film I’d hate to spoil any of it) is something that we are all fearful of these days, given the current state of the economy, and the film plays to those fears. While it is an international action thriller, it’s no ‘Bourne’ movie, but ‘The International’ features one of the most spectacular shoot-outs in recent memory, set in the Guggenheim Museum. The set looked so legit, that I had to look into whether or not they actually shot in the museum, much to my disappointment, they did not, but they did a damn good job recreating it. Tykwer goes out of his way to feature the architecture prominently, from new world (Germany, New York, etc), to old world (Turkey). The cinematography here is excellent, but, I’ve come to expect that from Tykwer.
Naomi Watts fans beware, despite being featured on all the marketing for the film, she is as supporting as a character can get. The movie belongs to Clive Owen without a doubt. I’m liking him more and more on every outing. (If you still haven’t seen Children of Men, rent it. Now.) ‘The International,’ is an entertaining film, and I’m afraid they aren’t doing a great job promoting it, and it has some severe competition for ticket sales despite kind of a so-so month for movies. But, if you don’t trust my review, check out the exclusive clip here, then come back here and tell me you don’t want to see this movie.