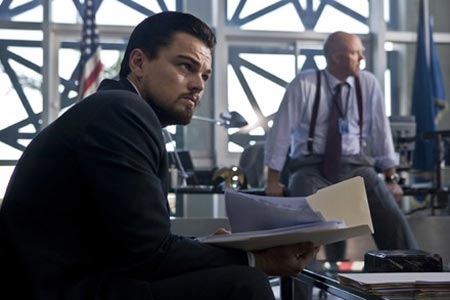 Now I say this with the utmost respect. I sometimes feel like there are two different types of Ridley Scott films. There are the Ridley Scott films that I feel like he feels very passionate about (Gladiator), then there are ones that he might feel passionate about, but the evidence isn’t clear in the final product (Kingdom of Heaven). This is how I feel about ‘Body of Lies.’

‘Body of Lies,’ tells the story of Roger Ferris (Leonardo DiCaprio), a CIA field agent in Iraq, tracking down terrorist leader Al Saleem. Ferris moves to Jordan on a lead, and is hot on the trail of a series of attacks in the west, master minded by Al Saleem. Ferris is handled by Ed Hoffman (Russell Crowe) who delivers his missions and orders while dropping his kids off at school. Crowe has many faces, in ‘Body of Lies,’ he’s what I like to call “Portly Oafy Crowe.”

Ferris liasons with Jordan Intelligence Officials and is asked by Hani Salaam, the head of Jordanian Intelligence, to “never lie to him,” which of course is a nudge at the central theme and title of the film, lies, and deceit.

For DiCaprio and Crowe, this film was nothing special. DiCaprio often moves his career forward with every role he takes on. This movie is like white bread for the actors, no nutritional career value.

The film has everything, action, thrills, and romance, but, it never feels like it comes together. At no point did I feel strongly about anything. In fact, the most interesting part of the film was the last 30 minutes. Everything before that felt forced. The films’ twists and turns felt uninspired. Almost like writer Bill Monahan had an idea of a great ending, and had to fill it out. It’s underlying themes are pretty obvious,

As always, the cinematography was top notch, and I expect no less. But as a whole, the movie was missing that extra little heart it needed to sell it to the audience. All that said, is it entertaining? Definitely. Am I glad I rented it? Even more so. Is this required viewing? Not in the least. Do yourself a favor, if you haven’t seen it yet, go watch American Gangster instead.